The Madness Of It All. 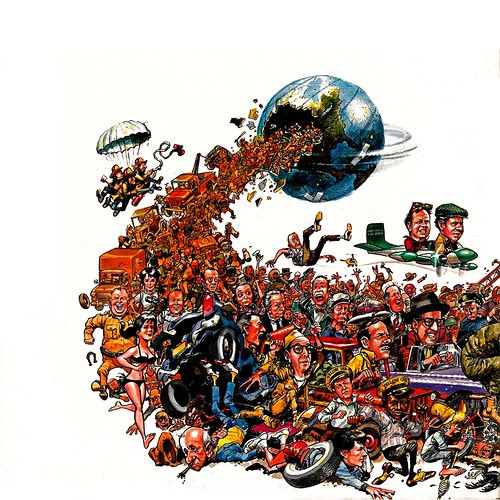 Some possible answers to this anxious and querulous post by my fellow blogger, Demetrius. Firstly I would say that 24 hour rolling news is a good idea atrociously presented and biased. Thus our insatiable need to be given quality broadcasting and media information, free from the corruption endemic in the corporate, political world we live in, is not going to happen. We are fed a diet of trash and "opinion" designed only to persuade and control. A perfect and terrible example hit us yesterday.

The six unnecessary deaths in Afghanistan. The same old tired, worn clichés were trotted out. Buffoon Cameron whining about security at home and how it justifies our failed efforts to defeat an indigenous population. Not one word about the drug, CIA backed, enterprises, or Karzai's millions stashed abroad. Certainly no explanation as to why Abu Quatada is allowed to flourish on these shores and cost us hundreds of thousands.

Not a word about the sieve like border controls that without a shadow of a doubt allows the tooing and froing of our enemies and the establishment of ghetto based terrorist cells all over our once precious and safe land. Such a predictable load of garbage to justify the impossible. See, Demetrius, what I mean?

There are so many examples to choose from as to why we appear to be overwhelmed by awfulness. The politics of fear has long been the weapon of choice to cover up incompetence and criminality by our so called elite. It is little wonder the diet of doom pervades. It's a weapon and when we succumb to its pervasiveness we are losing to their agenda.

In that agenda is that dreadful ambition for a world government. Subordinate to those aims, NATO, The UN and The EU are intertwined. Mind you we know how often in war the generals are rubbish and the troops pay the price. So if a collapse of our economic structures is a plan, it appears to be going very badly and sure enough we will pay the alarming costs.

That is unless enough people cotton on and ignore the mainstream media and corporate mouthpieces. Nowadays we do have, for the time being, the blogosphere and internet. Here greater analysis and more honest supposition reigns supreme.

How bad can criminality get? This article/blog post is fantastic. It lays bare the nastiness of Merkel Merkin's rather shabby covering up. She is pitched against forces she is bent on destroying. Amongst her perceived enemies are hedge fund market makers and her own legal constitution. The awful woman is "banking" all our well being on a throw of her dice on a wheel she knows is rigged. What is worrying, for her, is that her audience is beginning to notice there is only one number in the roulette wheel, her ambition. Thus her deception, almost knowingly criminal, is exposed. Not, of course, one broadcaster with the nous or if possessed of it, the courage to break out and tell all of us what is really going on.

Finally, on a lighter but still very serious note is this what a waste of borrowed money! Why does nobody ever query the obscene waste of a big government nobody ever asked for? Why does our silly bunch in Whitehall and Government not see that the cost of their existence is unaffordable? The EU, with their myriad offices and buildings, monuments to crassness and vanity. Their special trains to luxuriously glide between Brussels and Strasbourg. Their duty free shopping malls denied the cattle truck travelling people who they bleed with their grasping demands and stealth taxation.

So, Demetrius, if these scandals were a daily diet  of impartial news broadcasting and media outlets, which included exposes galore, coupled with retribution and humiliation of the perpetrators, we would surely all feel better? If we had a more varied and fecund foundation of interesting and searching comment, the nightmare deluge we are cajoled into accepting, would fail. Few of us cannot fail, surely, to relish the downfall of Huhne. We need many more to satiate a justified passion for revengeful justice.

Well, we have such a platform. Sadly it's too rarefied  a place to visit. It demands more than the celebrity culture, soap box, X-box corrupted consumers can manage. It demands individuality and character and more than one brain cell. Therefore we see that the government, media and abuse we suffer, at the hands of those in power, is, to a degree deserved. Of course, as yet, those who would be free have not, so far, en masse, been given the Winston  re-education.! Frau Merkel is trying her best, however.