Now The First Mrs Rochester's Telling Us What To Do. 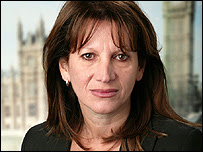 What is it about Lib Dums that makes them want to lecture, nag, pontificate and arrogantly tell us how we should all live. Naturally it's all about do as I say not as I do. Just when the last pathetic know all, Huhne gets his collar felt this, harridan, this wizened, not wise, old bat pops out of the woodwork to replace the mad scientist and Don Quixote, climate moron.
She writes  “it is the government's fundamental job to reflect society and to shape the future, not stay silent where it has the power to act and change things for the better." Taken from here. Now who decides what is "for the better"  and who says what is fundamental about Government? It should be reflecting the majority, not the minority for starters. It should manage not dictate.
I am heartily sick of the gay Mafia agenda. Just because some sad, queer freak of nature wishes to march down the aisle, mimicking his female counterparts in some mock ceremony, we all have to bloody change our attitudes and beliefs. The passion for "look at me" that pervades the immaturity of the homosexual Prima Donna is a nightmare the so called Government are demanding change for. Like there aren't more important matters?
This agenda goes on and on and is pathetic. As is even having an Equalities Minister. A woman as daft as a box of frogs. Someone more intent on this rubbish than the dreadful unequal plight of the victims of Asian grooming. Where will it all end? When will the majority realise enough is enough and we want common sense back in our lives?
Interfering, dictatorial busy bodies with too much of my money in their pockets and too little intelligence to do what I want them to do. Just leave well alone and let the majority will prevail. As if that will ever happen again.
Still if this rancid, failed woman had a proper job the world would stop turning, wouldn't it, the crazy old hag.
Posted by Oldrightie at 15:14