How's This For Off The Radar? 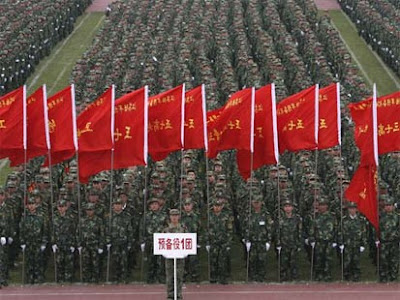 Now this  is not allowed much space in the public's domain and presumably a "no go" area for The MSM. Of course any suggestion by our in hoc, up to their eyeballs, Bilderberger schemers, that China may not be such a force for good, is not allowed, is it?

Why not allowed? Well, The Chinese will have some pretty damaging intelligence on Western leaders. Not least how their gold rush to China was fuelled by the greed of the few and their obnoxious arrogance. When you consider the rectitude for criticising China's inhumane activities towards their own people and their subjugation of The Tibetans, you begin to see an emerging pattern.

That pattern is an unholy alliance with The Chinese leadership, as part of the mushroom farming philosophy of all despots. Be they corporate, political or just plain narcissistic shits, the West's crawling to China for business and bailout money is an embarrassing failure. A failure which would be writ very large if the scenario suggested were to happen.

Prior to the internet this would have been paraded, by those aware of it's possibility, as a complete surprise. Behind the scenes the manoeuvring to supply weaponry and pseudo diplomacy "industry" will have gone into overdrive. A significant diversionary tactic would be welcomed by the beleaguered New World Order, World Government planners. I suspect there exists a hidden UN, including China and India, amongst the usual suspects.

As I so frequently say, what we know about isn't that nice, where politics, corporations and their banking quartermasters are concerned. What we do not get to hear about is hair raising in the extreme. I rather believe that the globalisation of terror and fear is as much a part of our rulers arsenal as any other "terrorist" movement. Never mind the EU dictatorship's ghastliness, it's just part of a global reach constantly gaining ground and control.