No Mainstream But Lots Of Other Links! 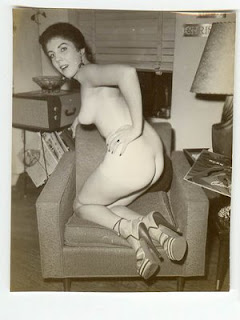 May get censored. Once, so far.
Here's one and another. Is this dirty tricks, nasty politics or true? Whatever the reality behind the pictures, some reasonable debate surely is not remiss? Indeed since this post was published censorship of the original image has been carried out. I'm sure someone will have retained the three pictures somewhere. Does rather hint at a degree of efficacy though!

I consider a powerful individual's background worthy of consideration and their personal lives relevant when, what forms character and personality, promotes advertising of "wholesome"  façades. Or more pertinently they have their digit on a nuclear button!
Of course, the power of the CIA will have some hand in all of this. If it were true then the son might have more respect for admitting so. I suggest he would recognise the face of his Mother when young.
As is pointed out elsewhere, were this a right wing powerful man or woman, the left would have no hesitation in waving their moral but tattered flag of moral pretension. Personally, were these pictures genuine and her past so notorious, hard times lead to hard lives, fact.
I thank a special lady for the the heads up on a story which, like  Dunblane,  is unlikely ever to be known by we "little people". Just as the powerful are busy crushing the weak in protests all over the World, it is very hard to fight back and seek honest truths. I have removed a link to she by request because of the probable spook interventions. They're always watching, as 1984 morphs relentlessly into reality. Still, the so called "intelligence" agencies are even more controlled than the rest of us. Not an independent thought between all of them.

For the record the pictures are regarded as being too old to be of the Lady in question, circa 1950s, whereas the son's Mum was just 17 years old in circa 1960. A funny old world regardless!