One Maybe Down A Few More To Go! 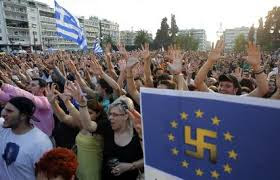 As we drag ourselves into a Saturday morning I feel, no doubt like many others, what the hell happened? Somehow it sort of feels like 1940. Except for the lack of cordite smell. A bloodless take over by a German led Axis for sure. That it is head quartered in Brussels, with a crowd of Rompuy nonentities as front men, is not that far removed from 1940 either!
The BBC now has an army of Lord haw Haws as well. The subtle but ever more obvious language as ever. "UK alone". "Britain isolated". "German and French angry with the British PM". "In fact, 26 leaders are in favour of joining this effort. They recognise the euro is a common good," said EU Council President Herman Van Rompuy.”
No mention of the unelected aspect of Rompuy's glorious title and the "26 Leaders" who have caved in are not speaking for their people. Indeed The Irish are reported as duty bound to hold a referendum. Well, two actually. The second to overturn the first when the good people say no. On top of all this an American General no less is trotted out to lay the old chestnut of  the politics of fear.
However the good General may well be correct when the theft of life savings, pensions and draconian taxation kicks in. All of the measures set up to replace the heavy weaponry of more historic conquest. Sure Merkozy and their lackey Axis leaders will pat themselves on the back and feast royally at even more sumptuous banquets. One very massive one pencilled in for Rompuy to host at the opening of his new edifice to stupidity. This is the immediate EU future.
That £280 million is found for this whilst people are starving in Greece tells you everything. To be removed from the whole nasty construct that is The European Federal State is to be desired. Maybe, just maybe Cameron, probably unintentionally, has set us on such a course. Now if we start to withdraw from EU/NATO  backed ventures such as the nightmare in Afghanistan, what's not to like?
How about a complete divorce on the grounds of incompatibility and mental cruelty? Billions saved overnight, a carefully invested programme for a UK revival and as EU States struggle with crushing debt and austerity they will be begging other countries to buy their goods and do business. Business which will through natural causes favour a buyer with cash in hand!
For me the EU has sown it's own time bomb. It has never worked. The rules were broken big time before, why not now? It's a huge colossus of hubristic created debt incapable of being solved. This so called deal is little more than a fig leaf to dress the Emperor's naked ambition. As winter draws on he will get ever colder until hypothermia shows the rest of the World it's a living corpse! If that's a mixed metaphor I don't care! Have a good weekend. It looks warmer here than on the Continent and we survived Dunkirk, didn't we?
A summary of what we are missing!

1. a cap of 0.5% of GDP on countries' annual structural deficits. from when? They're are already well in excess of this.


3. the tighter rules to be enshrined in countries' constitutions. They mean EU states, of course.

4. the EU's permanent bailout facility, the European Stability Mechanism (ESM), to be accelerated and brought into force in July 2012. Using who's money?


6. eurozone and other EU countries to provide up to 200bn euros to the International Monetary Fund (IMF) to help debt-stricken eurozone members. Well 9 other countries I would hope. We need our dosh here!


All in all rather unsavoury and a poor disguise of the coup over sovereignties it really is. "You vill do as ve say or else!"
Posted by Oldrightie at 09:23