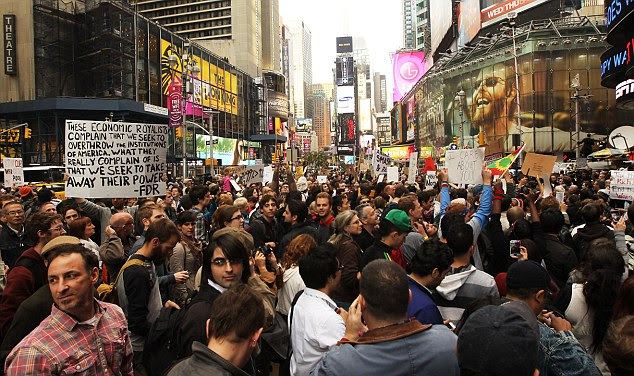 This report illustrates a media attention for a unique event wherein people from across The World have united in protest against corporate and political failure through unadulterated greed. Many bloggers have, with reasoned argument, decried these actions. In some cases sited underhand Machiavellian influences.
I argue that in our modern society these possibilities are probable. However it is in the interests of change for a better existence for more people that  protest on a massive scale is required. I don't accept capitalism is bad per se. Rather it has been diverted into unscrupulous hands for the benefit of few too many.
So if The MSM are taking notice and leading with a corporate and political dissatisfaction as being the root of these protests, the anger and frustration leading to violence at times, this must surely put a little nervousness into the so called elite buffoons who have failed so miserably.
As I have alluded, human nature will always throw up a less than acceptable behaviour but "breaking eggs to make an omelette" surely fits this environment of protest. Only this time the "eggs" are those belonging to the erstwhile chefs and people who have made a distasteful omlette of our Planet to date!
So I urge bloggers to push to support the protests and bring that arrogant disdain of the rich, corrupt political, gangster and corporate attitude to heel. Only through sheer weight of numbers will we ever nudge a modicum of fear into those minds. Cracks in ideology and superior intellect must not get in the way of forced change. It is those very offhand ideologies an EU Superstate as Redwood called and accepted it last evening) that got us into the mess, don't let them ruin the opportunity for correction and improvement.