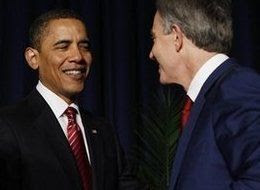 
"Yeah, the permanent political class – they’re doing just fine. Ever notice how so many of them arrive in Westminster or Brussels of modest means and then miraculously throughout the years they end up becoming very, very wealthy? Well, it’s because they derive power and their wealth from their access to our money – to taxpayer dollars.  They use it to bail out their friends in Canary Wharf and their corporate cronies, and to reward campaign contributors, and to buy votes via earmarks. There is so much waste. And there is a name for this: It’s called corporate crony capitalism."Read more here.  Or listen to the header video.
I have, of course, substituted in red for Washington and Wall Street.


Greater minds than Oldrightie's have hailed this marvellous speech. I can only compare it to.............

A different enemy but just as precipitous a time. There is so much resonance this side of The Atlantic with The UK and EU failures.
"We sent a new class of leaders to (Westminster/Brussels)  D.C., but immediately the permanent political class tried to co-opt them – because the reality is we are governed by a permanent political class, until we change that. They talk endlessly about cutting government spending, and yet they keep spending more. They talk about massive unsustainable debt, and yet they keep incurring more. They spend, they print, they borrow, they spend more, and then they stick us with the bill. Then they pat their own backs, and they claim that they faced and “solved” the debt crisis that they got us in, but when we were humiliated in front of the world with our (The EU's)  country’s first credit downgrade, they promptly went on vacation."
Such powerful stuff but our MSM and leaders have tried to suppress it and hush it up. Only the Internet is realising the power of this speech.
The resonance goes on,  "He (Obama, could be Cameron) wants to “Win The Future” by “investing” more of your hard-earned money in some harebrained ideas like more solar panels and really fast trains..."When I blogged some time ago about Sarah Palin,  last November, the usual unpleasantness rained down and the "permanent political class" sycophants of the left piped up. Well, I suspect they're just a bit taken aback about this sudden outbreak of common sense. Long may it continue!