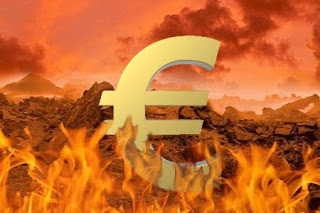 From Reuters since all the pathetic MSM can come up with is endless LimpDum and the other Party ever dwindling jamborees.
Now here it's getting very serious. China and the Drug barons seem to have virtually all the cash in The World. So when they decide The Euro zone is not worth bailing out as much as they thought, that's a BIG problem. So for all the windbag machinations and bonhomie of the UK Party Conferences surely even these clowns will realise that for them and The EU, the party really is over. Pooped by forces stronger and dare I say a bloody sight cleverer than our pygmy pillocks.
The calamitous and crazy New World Order so beloved of Snotty Gordon never once looked over their shoulders to see the juggernaut racing up behind them. Indeed out lot expected to jump aboard as it sped by. How daft was/is that?
Globalisation as desired by the West has not worked as hoped, precisely because it cannot. The creation of a massive boy's club of corporate and corpulent greed never stopped to ponder that the party might not last. America decided a Federal Europe was a desirable goal to bolster their vision of a tri-partite Globe. Never once, in this dash for exponential growth, did anyone ask how much it was costing.
To fuel the ever greater expansion and to control it, war, financial ponzi schemes and promises of elite membership, were the the carrots offered to emerging Nations such as China and India. They cleverly took all that was offered then decided their club might well be preferable to the dilapidated, tired and out of control, devoid of ideas, beyond greed, of their sponsors.
My hope is that China will dictate an orderly dismantling of The EU and the present make up of American debt. That in return for bail outs the Chinese will demand a return to fiscal and prudent governance so frequently spoken of by Snotty in the sure knowledge he was never going to fulfil it.
Since Obummer is now a Snotty re-incarnated, with his trillion dollar pissing contest with other peoples' money, somebody needs to say STOP! I know of no political leader in the West with that stature. Certainly not one single EU candidate. So, as these party Conferences continue endlessly saying much and meaning little, look East. Only there sees any kind of salvation. That, as ever on the backs of millions of dead and downtrodden. Humanity, don't you just hate it?
Posted by Oldrightie at 05:23