"It's Own Funeral Pyre." 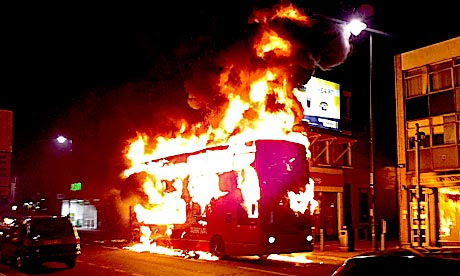 This speech could apply this very day. "There's nothing we can do about it, a public opinion unregarded". Just listen to these words. "The deliberate dismantling of decency, morality and respect".

It is scarily and spookily applicable today. Here are words messianic in their warnings and as relevant to these riots, looting and social breakdown wrought from a black racist (tribal) violent resentment of the endemic North European population, long suppressed. The fear should now be a bursting of the tolerance so long taken for granted by politicians and their failure to represent their electorate rather than themselves. There is no deterrent anymore. We are weak and politically correct, which has played into the hands of the greedy and the powerful as well as the gangsters and their exploitation of the idle.
Talk now rages and probably top of this morning's COBRA agenda, about the use of troops. Hang on, they're busy fighting abroad to keep our streets safe!
My anger is reserved, not for the thugs and their mindless racism and resentment but for the political classes who through their left wing, social liberalism, have swept away discipline, aspiration and personal responsibility. Listen to Powell's  warnings and his anger at the Establishment. Warnings echoed today, by so many, about the direction of a Statist Europe. Those are "unregarded" and will, indeed, are going the same way to create a Continent which will respond in the same explosive manner we are seeing in Britain. Led by the sad description of our capital City known as Londonistan.
One small silver lining, the BBC aren't so smugly superior, as the flames threaten their own expensive doorsteps and wartime style evacuation of children looms.
Posted by Oldrightie at 11:08