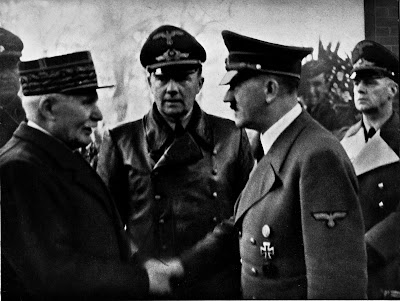 The 16th of August, 2011 is as infamous a day in our history as was Petain's machinations over the corpses of his countrymen. "The French and German leaders have called for "true economic governance" for the eurozone in response to the euro debt crisis."
As countries throughout Eastern Europe escaped the yolk of communism and the dreadful USSR, brought about by the likes of De Gaulle and Stalin, so they were lured into an unholy alliance with the most dreadful, corrupt Axis of evil since Hitler.
This announcement of an expedited EUSSR has been planned for months, if not years. Trust me, the spade work, digging our graves to bury our freedom, was done over the past few months to get 17 countries' Quislings on the bandwagon to hell. As for our own smooth talking treacherous pieces of excrement, dragged forth from the sewers of self interest, privilege and ambition, I have no words to express my disgust.
As we witness this atrocity in our name and at our expense just marvel at its success. Our taxes have been given away to fund all this corruption. Now the Mafia bank rollers have to be paid. http://tvnz.co.nz/world-news/mafia-cash-may-help-keep-banks-afloat-2470293
How can we sleepwalk into this dreadful Union which already has failed millions of us. Pensions ruined, jobs destroyed and a membership fee to this cartel of corruption at enormous cost. We can only pray for a Churchiilian figure to rise up and lead us into war against this invasion every bit as deadly as expected in the 1940s.

Is this what we fought for? Is this repetition of history my generations thank you to all those, on every side, who were massacred on the alter of this vanity? I see little difference except our Dunkirk is littered with pathetic smokescreens about sodding phone hacking. This atrocity that is a fedrral Enslavement goes unremarked and billions of our borrowed debt are diverted to conquer us. We are letting it happen. Uprising is seemingly unavailable and I for one, hang my head in shame it has come to this. God bless those who died so pointlessly to have their sacrifices trampled underfoot by the same old Franco-German Axis.