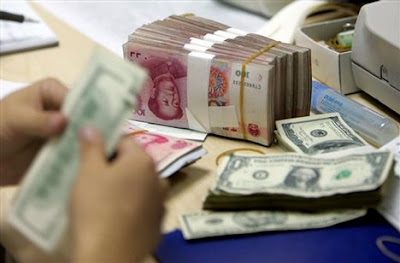 I suspect this is being monitored the second the "EU" name is flagged up. What an intrinsically nightmarish time we live in. As the obvious failure of the single currency and colossal failure of the federalist dream becomes ever more obvious the more these asses will squeal and shout. The previous bail out of Greece was trumpeted as a success at the time. A few short weeks later and we are not back at square one, we are ever deeper into debt. What is it about the politicians that somehow human nature can be changed, brainwashing works and ever more borrowing and debt is the answer to everything?
It is almost amusing that as the ability to control us through debt, backfires, these pathetic individuals cling to their epic failure as a child to its mother. There is only one solution to the economic woes and that is for those who benefited from the "boom" now pay back during the "bust". The investors in debt "instruments" and the New World order folk, led by the likes of the Rothschilds and Murdochs and their dubious political foot soldiers like Clinton, Bush, Bliar, Mandleson and even Snotty.  Somebody holds precious metals, commodities, land, food, water, oil and gas.
It's time these conglomerates paid back into the world's financial coffers the money garnered and the politicians should be seeking use of those assets, not more debt and taxation from those innocent of anything but a day's work.
Instead ever lengthening mortgages of the future, ever more luxury meetings and summits, all conspire to agree more of the same sh*t that got us in this mess is required. Their greatest skill appears, led by Merkel, to be to throw petrol onto the flames of debt. Give citizens back more of the cash you've peed into that empty vessel called The EU  and within a year Greece would be happier, Portugal getting better and Spain would go back to being Spain. Even the Irish might learn to grow spuds once more. Small really is best and a darn sight more manageable. Not only is the EU but the globalisation project a busted flush. How much longer before it dawns in those minuscule brains that are in the political and MSM thick heads, that their way has FAILED. Here are some interesting pointers to this disaster,  from this sobering paper,
“I am certain the success story of the Deutschmark will continue with the success of the euro”. - Then German Chancellor Helmut Kohl, 1998
“We have a Treaty under which there is no possibility of paying to bailout states in difficulty”. - German Chancellor, Angela Merkel, 1 March 2010.
And today
“We said time and again, if the stability of our currency was in danger, we would act quickly and decisively. And this is the point that we've reached”. - German Chancellor, Angela Merkel, 3 May 2010.
“Every one of us can see that the current euro crisis is the hardest challenge Europe has to meet since the Treaty of Rome was signed. It’s an existential challenge, and we must rise up to it”. - German Chancellor, Angela Merkel, 19 May 2010.
“This must be done to avoid a chain-reaction to the European and international financial system, and contagion to other Eurozone states. There is no alternative”. - German Chancellor, Angela Merkel, 5 May 2010.
“In 2000 we had a situation when we were confronted with the question of whether Greece should be able to join the Eurozone […] It turned out that the decision [in favour] may not have been scrutinised closely enough”. - German Chancellor, Angela Merkel, 28 April 2010.
“The German chancellor can make as many admonitions as she pleases. She could even threaten to turn down the request for aid. But this is no more than politically motivated banter. In the end, Germany will transfer its billions over to Greece - the pressure from European partner states and the financial markets is too strong”. - Editorial, Die Welt, 26 April 2010.
A brilliant but sobering piece.
Posted by Oldrightie at 10:11