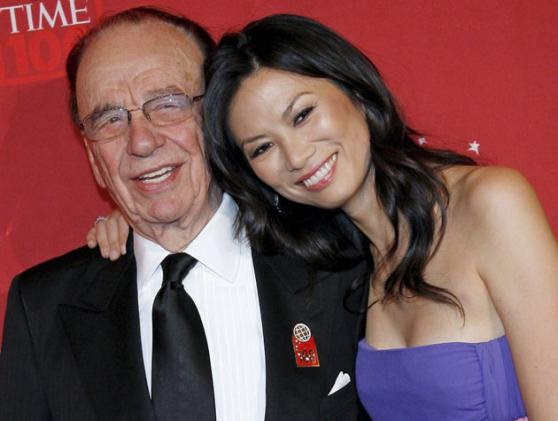 This leery old fart, Murdoch of murky power grubbing fame, might have had a life of riches and dubious behaviour but still fits the bill that there is "no fool like an old fool". OK, so we all realise that his handsome looks, sprightly demeanour and sexual magnetism are what this gorgeous lovely sees in him but we see something else in the growing world of blog land influence. He's no more than any of the rest of our fading elite and Western decay, with a legacy that will be seen as a psychological Pol Pot regime.
Now RT is beginning, rather sooner than I expected, to go down the propaganda route and following a political loyalty agenda, as read here. Guess which side we're on? . They also recently referred to Abu Hamza as a moderate Muslim!
Back to my point. I blogged recently is blogging doomed.. Inspired by the wishful thinking of the MSM and the retiring from the field of many ostensibly right wing contributors.
I was bullish and made the point that we are generally anti-establishment and indeed I have moved significantly away from political support of any party or their flawed ideologies, that ignore the realities of human nature. This change of mind is all down to blogs and a daily menu far more eclectic and believable than the MSM and their celebrity pulp fiction.
There is little argument that social networking and blogs have helped fuel genuine revolution throughout the World and God willing, will continue to do so. The biggest weapon, as ever, is humour and getting the populace to laugh and embarrass those deserving of ridicule.
So, love him or hate him, the most successful UK blogger to date is Guido, aka Paul Staines. If he's getting wealthy on it,  all I can say he's  far more deserving  than the hoons of Westminster and Government. He is still a standard bearer as shown over last weekend, by embarrassing one of Murdoch's flagships.
So let us give thanks to this latest initiative,  an example here, which, in my humble opinion, is the forerunner of an on-line blog newspaper. Who knows, a few saucy images, fewer plagiarised stories, no PC crap and less sycophancy and it really could take off, leaving our Rupe to concentrate on Viagra swallowing.
To close, listing all those deserving with regards to UK blogging in particular, I leave to others. However the last link is the brainchild of an acerbic but excellent commentator, who I regard as very much leading the pack, in a better way than even Guido. May his power be ever greater and always quietly successful. The
Eureferendum.blogspot.