They really Are Spooked! 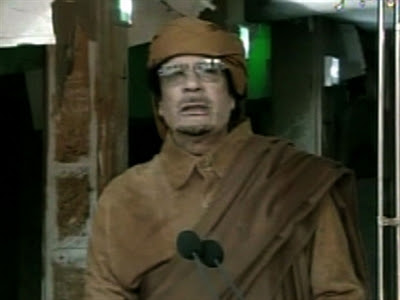 Mrs Squeaker called him a loon. She should note what happens to long term snorters. Bliar is conspicuous by his absence, Baroness Ugly of Ashton and EU uselessness floundered big time under Paxo's casual stabbing, whilst vague mutterings could vaguely be detected from Vague Hague himself. Obama can't understand a thing that's going on except to be embarrassed by the regime changes taking place without US puppet stringing. Meanwhile these cretins continue to support Karzei's beavering to establish exactly the kind of regime in Afghanistan we see being torn down elsewhere. Not content with hell and destruction and regime toppling in Iraq, the UN mouths grotesque but very expensive mutterings over this turmoil with as much effect as vomiting into a wet paper bag. Now I realise that all of this will hurt us all personally via petrol and financial meltdown. Yet I cannot help thinking that, the other side of the events, future globalisation aims will be curtailed by Sovereign peoples taking control of their own destinies more frequently than hitherto. Well, who has yet to ban hope and dreams? Gaddafi refers to himself as a martyr. Those real heroes are the ones dying for our sakes and freedom. I wonder how Megrahi is coping with all this? Justice of sorts here, as well!