It's Gone A Bit Quiet In Libya.

What Happens After The Unrest? 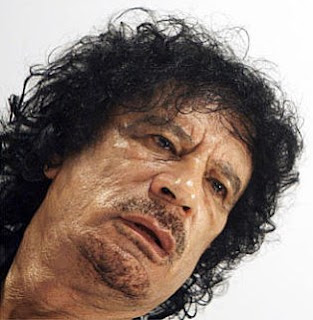 Gaddafi on a good day.
This excerpt below is from an article showing what an evil shit he is. One feted by the West for the black gold and gold Rolexes to be had. From Obama to Brown via the most corrupt of them all, Bliar, the mantra is "this is how it works". Nothing but nothing must stand in the way. Well, in the way of what? The UK has coal, oil, food, skills, (those not watered down by Labour's crap regime) and the potential to survive. It's pure propaganda to preach that globalisation is the only way. Pseudo Dave's at it now. Touring the Middle East flogging weapons and secrets. For what? Jobs, wealth and the joys of materialism which it is expected a grateful, suck it all up, greedy people will thank you for and keep you in power? In this world of so called diplomacy, decency and honour, slavery, drug trafficking and gangster mob rule is all that matters. The torture, rape and murder of would be free people is tolerated regardless. A shameful and dreadful world where we are just a commodity.Where children are just merchandise for the likes of Pederast Pete, no more than the acceptable face of Glitter. Pun intended. I know it's idealistic to rail against the sods but look at the moral high ground taken by the leftie and the chatterati. They all consider themselves above it all whilst peddling the lies fed to them in return for "access" and privilege. The martyrs being raped and tortured around the world and in our own backyards are expendable. Who is left to speak for them? Not a soul.
"Libya has a number of "special brigades" answerable not to the army but to Gaddafi's Revolutionary Committees. One of these is believed to be commanded, at least nominally, by one of Col Gaddafi's maverick sons, Hannibal, who clashed recently with Swiss police in Geneva after allegations he abused hotel maids there.
There are persistent reports that Col Gaddafi's regime has been making extensive use of hired African mercenaries, mostly from the Sahel countries of Chad and Niger, to carry out atrocities against unarmed civilian protesters.
Libyan witnesses say they have been firing from rooftops into crowds of demonstrators, in essence carrying out the orders that many Libyan soldiers have refused to obey."
We must pray the protesters triumph. They'll get precious little
help from Bliar and Co. 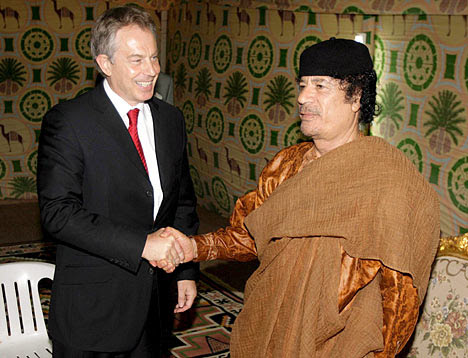 You can smell the blood on Blair's hands.
Was there ever a more Adolf like arse in the UK's history than this grinning merchant of horror and that's just the white guy.
Posted by Oldrightie at 11:25