This Woman Is One Of Them

Taking Your Money For Self-Interest. 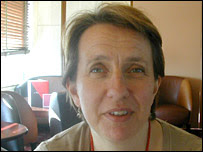 She's head of a very expensive Met Office climate change unit. On well over £100,000 a year to promote taxation via scaremongering rubbish. Just listen how it justifies white is black, cold is warm! Also note how quiet this junket in Cancun has gone in the MSM. Huhne luxuriating in his posh hotel smugly ignoring reality and probably sharing a Jacuzzi bath with Ms Pope! She says;
"In Britain especially, people have been persuaded that global warming is slowing down because of a run of cold winters, including blizzards this weekend. But this is just a short term trend." ICECAP NOTE:
Yes, unlikely to last more tham a few decades. Yes ignore the knee deep snow the UKMO told you in 2000  you would never see again in your lifetime. UKMO forecasts would be right on if it wasn’t for the damn Chinese.
Or,
Dr Vicky Pope, Head of Climate Change Advice, said pollution may be causing a cooling effect.

“A possible increase in aerosol emissions from Asia in the last decade may have contributed to substantially to the recent slowdown,” she said. “Aerosols cool the climate by reflecting the sunlight.”
Another factor that has reduced the rate of warming is a prolonged minimum in the solar cycle, meaning the Earth is receiving slightly less heat from the sun. Also short term weather patterns such as the tropical storms El Nino and La Nina."

Do these ridiculous people not realise that what she is witnessing are the variable instances of CLIMATE change through natural phenomena and not man made change! Her remarks about pollution are probably correct but pollution is not climate change and localised, relatively easily addressed. Our lives and our reasonable affluence of cars, central heating and food are attacked. The logging, deforestation, food processing conglomerates and commercial exploitation are unscathed issues not spoken of since they fund the myth to scare and tax us all. Not dissimilar to Banks, really. All one big rip off cartel. She really is one "them"!

To all of them this picture below says FOXTROT OSCAR!