An Edifice Is Cracking.

The Fault Lines Of Overweening Ambition. 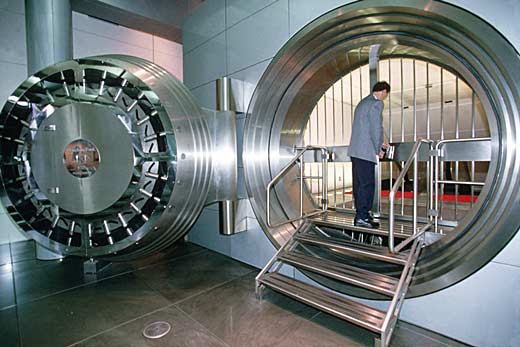 "Irish Finance Minister Brian Lenihan said on Wednesday he was confident the debt crisis in Ireland would not cause serious turmoil in the euro zone." When a man privy to the innermost workings of his and the EU cretins, makes a statement like this, after presiding over the debacle that he and his porky mate Cowen have done, beggars belief. Lets try some perspective here. A black country guy tells his mate he's marrying Doreen. His buddy replies, "Yo cor marry er, ers bin with every bloke in Walsall!" Replies his pal, " That doe matter, Walsall ay a very big place!"
I suppose he'll say that about Greece, Portugal and Spain. Eventually Europe will seem a very small place and its vaults empty as above. Can we really subscribe to a Federal States Of Europe with such idiots at the helm? I think not. Of course, Turkey, in his mind, isn't a very big place. The moron doesn't do maps. Or at least if he does he does so as well as he does finance. Boom, boom!
Posted by Oldrightie at 11:38