Everything We Ever Had. 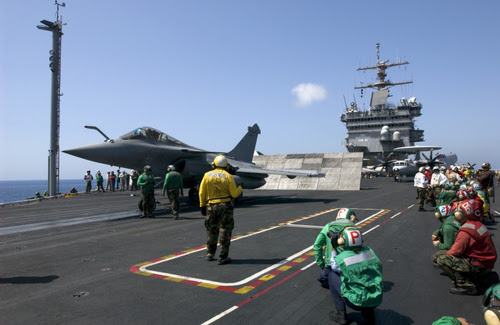 Just one example here of so many. Behind the photo ops and the glad handing are the secret plotting meetings and stitch up scenarios that go on in Parliament, Downing Street, Davos, Brussels, on swanky yachts and so forth.   Usually its about money, power and screw the Eloys even further. Forget ideology, Socialism, Conservatism, Liberalism or any other label you might wish to see represented. They are gone. All that is left is what you are to be told is left. Anyone unable to garner sufficient material and personal assets, in order to be able to ignore the reality engulfing us, is doomed to a future of blind obedience and subversion.
The deal to build carriers and fly French aircraft off them did not happen overnight. Just as the 2.9% budget robbery was agreed months ago. The pretence, the preening and the posturing I find sickening. That it is now headed by the leader of a once Nation saving Conservative Party is even more retching, vomit inducing nausea.
This Man, who might have been a great PM has already reneged on so much. Sack a lying, cheating old Etonian wally, no way. Stop kow towing to Islamic issues, no chance. Repatriate powers from Europe what a joke. Prevent expenses scandals in Parliament, not now my mates are in charge.
Stop, my sides are splitting at the idea that decency and promises mean anything any more. As I said, forget any thought of ideology, just surrender. Everybody else has. That which The Socialists started, these boys mean to finish. Except Afghanistan. That is to become, indeed is becoming, a forgotten war. As in Fawlty, "don't mention the war" is an EU summit must.
Posted by Oldrightie at 12:17