You Can Tell There's No Election For A Few years.

This Despicable Parliament Of Cretins. 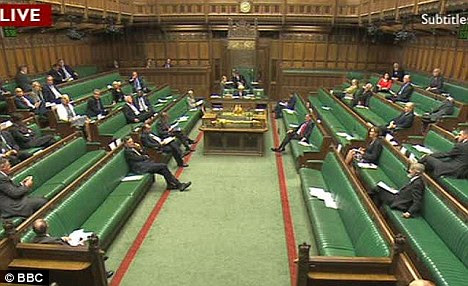 As this shower of Parliamentarians relax and enjoy our funded, luxury weekend, in their various country houses or illicit hideaway love nests and rent boy haunts, two more soldiers are killed in Afghanistan. How important is this to those MPs we elected just a short few weeks ago? The answer is shown in the picture above.
Why in the name of God and all decency do we have to continue to suffer the pathetic and weak morality of these grotesque and charlatan representatives. They are shameless opportunists and belong to a ruling elite made up off weaklings, traitors and to a man and woman, an undeserving cabal of weak and politically correct crap. Every single one lies, cheats, plots and scams a gullible party faithful until the moment they enter that place. That Devil's depository of shame and womb of sin that gives birth to a terrible offspring of arrogant nonentities blinded by their own self importance and deluded to a degree unbelievable to us mere morons. Nothing but nothing has changed. Just that the target has learnt a new camouflage technique.
Posted by Oldrightie at 13:26