It Is The Summer Hols! 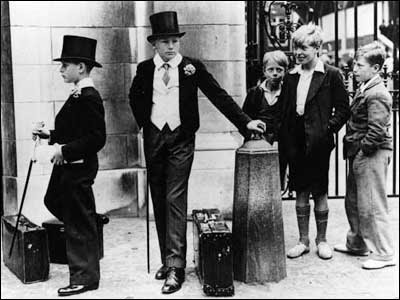 As a new term beckons the two young men shared an intimate phone call. DC requested of the dashing young blade, GO, his thoughts on Cloggy's stewardship, whilst DC was basking on a Bilderberger liner yacht in a secret cove for coves. Whilst making the 1000 times scrambled call, DC mused at the other yachts outside his viewing deck, panoramic, bullet proof window. The elegant vessels dwarfed only by the bow wave of the circling Trident part submerged patrol vessel and the assorted warships just on the entrance to the cove for coves.
GO expressed mild amusement at the lack of gravitas in the assuaged title of Deputy PM, knowing full well it had been Cloggy's ambition to replace the wreck that was Snotty, as a token socialist replacement in Downing Street.
This observation brought the two young Bilderberger Emperors to their solemn pledge, given on the Bullingdon rule book, to carry out a jape their Mandarins were working flat out to obstruct. Indeed the latters' passion, to prevent the escapade going ahead, rivaled the very best of "Yes Minister" duplicitous charm.
As the two boys exchanged giggles at the Civil Servants obsequious behaviour, honed over 13 years of new Labour sycophancy, they became ever more conspiratorial. PP, (perfect prefect) argued it should be done in the dead of night, whilst WF, (wizard financier) wanted it to be carried out during a Cabinet get together, when all the bickering and jostling would mean their absence would go unnoticed.
One factor they were both agreed upon was that it should be a spiffing thing to do and great jollity was to be had in checking out the bowels of Number 10 and the dark secrets the legendary bunker might reveal. Little did they realise how much this seemingly harmless bit of fun would turn out!
PP giggled quietly and bid his dearest friend adieu. Phony had just been piped aboard by a dramatically smart Gaddafi guard, in ceremonial garb reminiscent of scenes from "The Story of O". (Google it!) PP leapt across the deck to warmly shake his mentors hand, falling dramatically to his knees in a beatifically exuberant welcome. "Hi", said Phony, "where's the tennis court?".
So this little cameo ends for now. Two public school boys chat about their deputy head, whilst another erstwhile public school chum and esteemed, newly appointed, Bilderberger Head, arrives in great pomp and ceremony. The bunker plot remains firmly on the back boiler, for now!
Posted by Oldrightie at 12:08