Even Better Than The EDL. 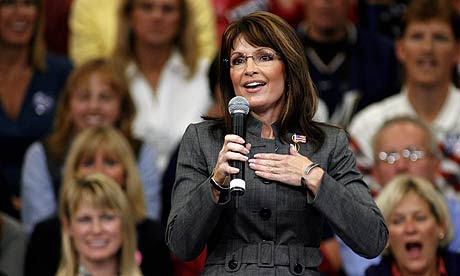 "Many at the rally said in interviews that they were drawn by a sense of disenchantment over the country's direction, alarm over government spending and a sense that the country's political system was broken. The event featured three hours of religious and patriotic speeches but offered few details on how to fix the country's problems." - Wall Street Journal


A far cry from the "far" right EDL rally in Bradford! Nevertheless it seems that both here and in America the silent acquiescence of the right is beginning to show a sense of mutiny against the constant harangue of the left and the leftie  dominated chatterati. If the economic capability of growth via support of a right wing resurgence gets identified, watch out liberal, softie wets like our own PM and his coalition of limp wristed cutters and lovers of Bliar.
The rally in Washington was joyous to read about. Whether you dislike Mrs Palin or not, she is going places. I for one am more than happy to see somebody stand up to the Bilderberger NWO of suppressive liberal left dictatorship and their attempts to control the very air we breathe. Just watch the EU send Obama and his dick head Democrats money and support, together with that rump of a dying political party known as Labour. Mind you we may yet see a Tea Party in the UK one of these days. A great alternative to the cloned clowns of Europe. Note the need to add, "but offered few details on how to fix the country's problems."". As ever, if it's right it's wrong for our pet media NWO sucker uppers!