What A terrible Shambles. 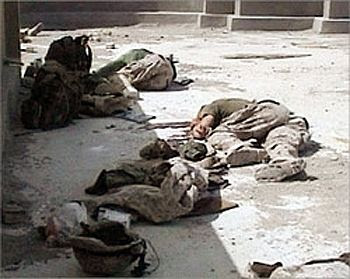 Gordon Brown was under mounting pressure last night to withdraw British troops from Afghanistan after five of them were slaughtered by a rogue policeman. "
http://www.dailymail.co.uk/news/article-1225090/Five-British-soldiers-killed-Afghanistan-single-attack-Taliban.html#ixzz0taOIZe8q
Then a repetition today and another barbaric crime.
What does this terrible act tell us? That we shall never win this stupid and ignorant conflict. I've said it before, 9/11 was to suck us into this and drain our wealth, in a decade long struggle or more, with only one long term result.
Our political system is all about short-termism and fails to recognise that the Muslim psyche is able to think on much longer time scales. I really believe that 9/11 was designed to suck us into Iraq and Afghanistan and we fell for it. The terrible losses and financial meltdown it is costing the West will be almost irrecoverable. The longer we pursue this vainglorious conflict the less we will be able to defend our streets and our lands. One thing is for sure, today's attack is not making our streets safer. This pathetic argument needs putting to bed. Why, oh why are we doggedly ignoring history? Just as we ran appeasement in NI, so we are doing in Afghanistan, behind the scenes. That weakness is costing dearly. We need to leave them to sort it out and not open up a safe haven all over the West for their holidays! Statesmen, it seems, have we none. Still politicos never come across as accepting they are human, more's the pity.
Posted by Oldrightie at 18:26