As The Sun Goes Down. 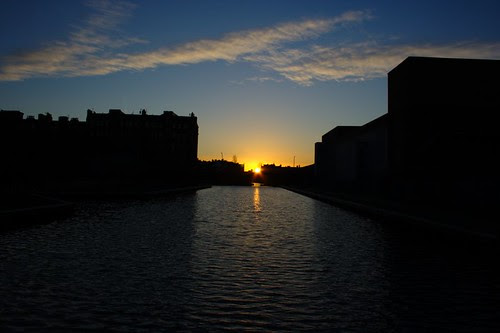 "What a long, long month. I know dragging the sprog down The Street, hobbled after by the Milch Frau, was a bit indulgent but sod it, my one last throw at getting sympathy. Now this eerie and barren wilderness. OK, the gun toting protection bobby still hovers in the background but you can see he's forgotten who I was already. Is this the case everywhere? I get not one phone call, not one, to endorse a successor to the tattered and rancid Labour Crown. The IMF have not called. Obama sent a note in Hawaiian, well I think that's what it was. Apparently it said something akin to happy hobbing. A mystery and he didn't even wish me luck. As for that G20 crowd. Salivating over young George before I changed my first nappy when I got home. Then there is this place." He looked around the old air raid shelter that had nestled under the sod for so many years. To compare it with the bunker he had so lovingly embraced for over two years, was just impossible. It was damp, mouldy and stank of urine that had not been contained with the finest cotton Terry towelling had to offer. Light came in through the cracked timbers of the ancient door and a constant drip, drip of endless water drops was frightening.
"I still feel a sense of hair shirt comfort" he mused, before the depression again washed over him.
"I just cannot face a mirror. I have no desire to mount my Dobbin or even clothe myself in the comfort of my nappies. Besides I have no butler, no sycophants, nothing." His head drooped further, the cloth dangled from his hands and he sighed the sigh of a broken man. Only one thought began to stir him. The leadership race would end, for the victor, in a place just like this. He finished disrobing, bound the nappy around himself and leapt onto the disheveled toy in the corner and rocked and rocked and rocked until he could rock no more, plunging to the ground with a massive, self-pitying sob of realisation. He was utterly forgotten.
Posted by Oldrightie at 07:14