Good Friday In The Bunker?

Seen At The Entrance To The Bunker, This Very Morning. 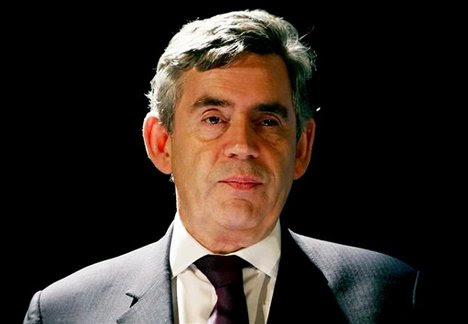 "As I gazed through the darkened entrance I could just make out my beloved but recently abandoned Dobbin. I knew he would be in fine fettle. My prolonged and at times joyous absence would have allowed him to be groomed by my Butler when not grooming elsewhere on my behalf. How quickly it had collapsed. In just a few days I'm expected to announce an election. Well fuck 'em all, I'm going to delay. I'll not give up all I have sold my soul to achieve to be snatched away, until I have to. Besides anything might happen before June." His Butler arrived quietly behind him, the freshly laundered and pristine terry towelling lovingly in his arms. The routine was so practiced as to need no words from either man, although the refusal to take the largactil was unusual. He was carefully eased onto his wooden confidant and the rocking, as always very gentle at first, began.
His mind wandered."The plan to coerce Kellner after his "Beckett lookalike" was now ensconced in her half million a year tenure, had been brilliant", he mused. As he reflected on the numbers the rocking began to pick up. His Butler had placed a brand new box of expensive Blackberry's near the old, stained sofa. "We were appearing to be a mere 2% apart. Shame Kellner wouldn't wear the 1% fiddle but it still had looked fantastic. I was being hailed from every corner. The great, powerful, brilliant genius I see every 20 minutes I look in the mirror. Oh, it was wonderful. I even had Peter P looking a bit flirtatious and was transported back to our early days of passion. Then, from fucking, bloody nowhere, Darling sodding not, comes up with this bloody crap budget. The bastard left out a million of my tractor production stats. The absolute, bloodsucking treacherous pillock. Country first, my arse!". The rocking began to rattle the runners of the poor old timber equine."How did those numbers go from 2 to 8 in no time? How, how, how?" he began to rage within himself and the towelling began to do it's secondary task. Outside the door Blinky "Bully mark two" Testicles was jostling with Hissy Pederast. There was much glottal stopping from testes and enormous hissing from the snake, dressed as always for these subterranean visits in his ermine. What the Butler, as he appeared in the doorway, was amazed to realise was they were not trying to beat one another to be first into the room. A newspaper fell between them. "Ah" thought Brownjeeves, "I saw that 10% Metro poll lead earlier". "Well, I'm not staying to see which one has to tell him" and with that thought, he dodged round the two weird men as they tumbled onto the floor, their momentum rolling them into the lair.
Nokia share dealing began to rise around the world. The new factory in Kircaldy was but days from beginning production.