Are We Still Fighting In Afghanistan? 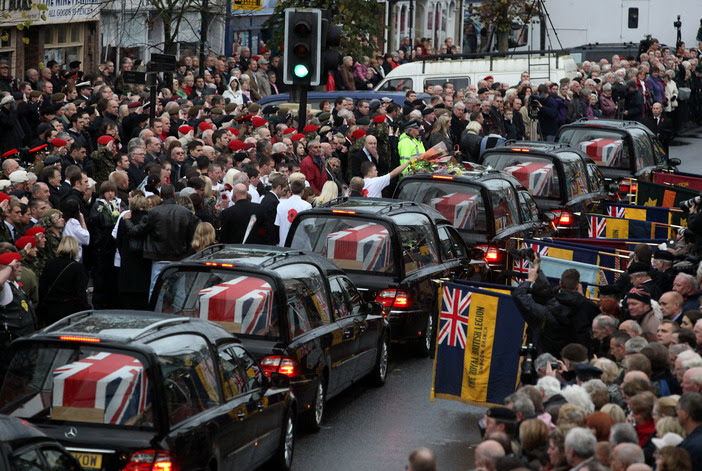 The cortege procession gets ever longer.

I am always nervous when our pseudo Government suddenly goes quiet. One minute Aintworthalot's ugly mug and twisted vowels are labouring (pun alert) all over our screens then zilch. All quiet on The Eastern Front (2)! The BBC dash a quick mention of ever increasing deaths and stay mum about the terrible rising casualty figures, so I begin to think something's not quite right. Well it's not. Civilian casualties, fleeing Afghan conscripts, mega booby traps and sniper fire has our guys bogged down every bit as our politicians have them so. Of course we are no longer bothered about The Russian failures, are we? That was so last century. Now we carry out opinion polls before laying waste to town's and villages. Now tell me, if somebody with a loaded gun asks you a question are you likely to tell them to f**k off? Great poll technique, General!
"A soldier from The Rifles and an airman from the Royal Air Force Regiment have been killed in separate incidents in Afghanistan. The deaths take the number of British service personnel killed in the conflict to 265."
I must say, Wootton Bassett might do well to run a 24 hour shift pattern, bless them, for little rest is likely in the coming months. Too many for too little are being wasted through political incompetence and arrogance. Hate just does not scratch how I feel.