Defense budgets are to be butchered, such language of cuts at a time when soldiers are being blown to smithereens daily. Great morale booster, Snotty. No doubt preparation to justify our bases being occupied by EU/German forces? 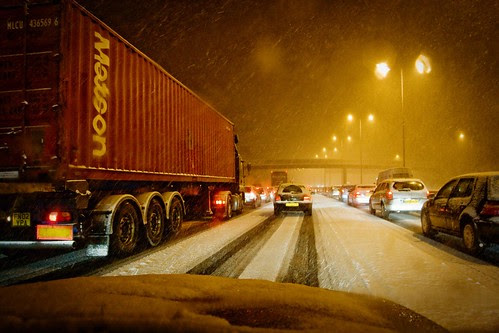 Brown dictated that central Government take over salt/grit distribution and their first act was to cut useage by 25%. Again the hidden reason is to control any bad press if supplies run out. So they don't allow gritting but claim we haven't run out! It's Labours' way.

Question time Cameron asks about cuts to be childishly harangued about posters. No doubt Jimmy Snot is heartbroken that Labour will not be able to or willing to plaster his ugly mug everywhere because of labour Party cuts.

With trillions of debt around our necks, cuts greater than seen for 20 years are inevitable. As pointed out by Cameron at PMQs these are the words of Brown's Chancellor. Snotty's response? More pique that his face is not to be given the Saddam treatment.

This Country, including Labour supporters, are seeing a second war battle being drawn. A battle with a deluded, pompous, arrogant, dysfunctional dictator, stubbornly clinging on by his fingernails aided and abetted by the kind of people shown in my previous post. Bear in mind Snakeoil Mandleson nor pederast Nick Brown found space on that blog but are still typical of the weirdos so undeservedly in power and made rich from our misery. This morning Snotty was claimed to be the stuff of many peoples' nightmares. He certainly is and that's before the real truth of the last almost 13 years will reveal post their hoped for annihilation.

One CUT we all pray for is this Governments time in Office. May the 6th? I guess the longer they wait the greater the defeat. A double dip recession will not be of use to the mendacious moron.