The governor of Region 9+?

Back In The Bunker. 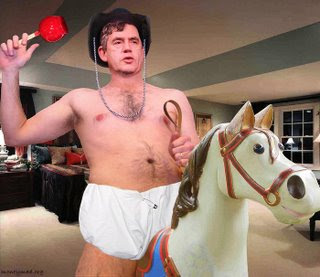 For several weeks he had foresworn the sealed, gas proof room below even the basement at the
decimal home of a once proud National Government. Now the long summer and Autumn was done, the documents signed, sovereignty surrendered. Sadly this great achievement was somehow an anti-climax. He’d had a good day against the juvenile but superior Etonian. Ally had taken time off from a film shoot for Hustler, Mandy was sulking over his snub and all seemed well. Then somebody discovered a two year old letter chore had been buggered up. He had not been able to suppress his anger and had insisted the guards set by Snakebite and Testicle Gob be removed from the bunker. As he slammed the door shut and staggered into his steel den, he groaned with a weary pleasure. His Butler had fresh nappies laid out, Dobbin was repaired and ready to go, a basket of shiny new Nokias was in the corner. He quickly shed his clothes, deftly knotted a towelling dirt cloth about his loins and pounced on the basket.
First out, “Testicles Etonian” he shouted and the first mobile shattered against the wall, followed by a screamed “Climategate”. Two more followed with cries of “ungrateful sodding Brits” and the final object was left for a huge yell of bloody soldiers’ bloody families”.
He now leapt onto Dobbin and rocked in his imitable fashion, backwards and forwards. The more angry he became the more he soiled the freshly laundered garment.
Unbeknown to all in the building, a new appointee had observed The Prime Minister disappear into this room. In an effort to be helpful she had led The EU delegation including Ms Merkel and The French Dwarf, on their way to the now unnecessary Copenhagen Summit, down to this subterranean chamber. The noise inside was not audible in the corridor. The large lever moved easily and she swung open the door………………