A Socialist Human Being? 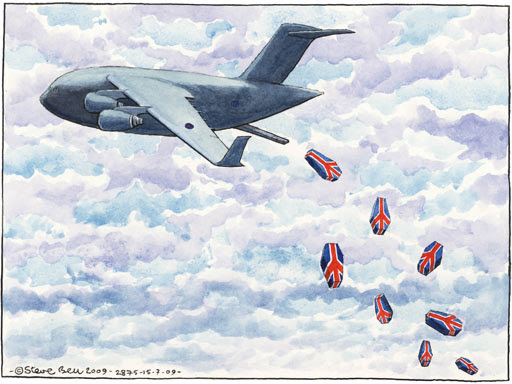 This perefect image by Steve Bell captures our Governments' attitude.

" We are told we mustn't think too much about casualties - we must think about the propaganda, the lies, the posturing that we have been subjected to for the last eight years" Labour MP Paul Flynn.
Keep going, Paul. Apply these words to around 1992 when Fondlebum and Wartony came on board, with the most evil shit ever, Allykellyliller and we might be getting somewhere. Just remember Ally's back on board. Aintworthalot's words were right out of Ally's "Say it often enough" manual. Note the lack of any factual support. We might even believe your expense claims were worth it!
I also expect an announcement that the Al Quaeda presence in Iraq is to be ignored? Rumour has it there is a plot to dig up and reinstate Saddam.