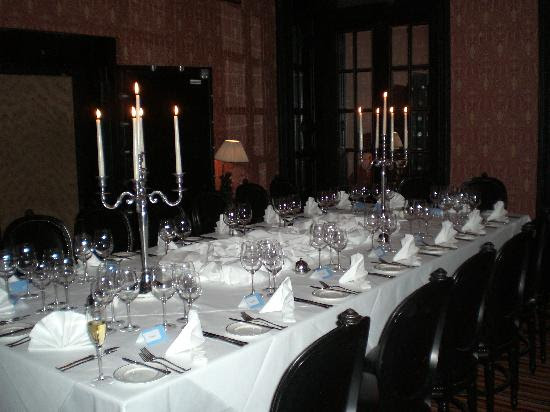 After the previous gathering had been rudely interrupted by starving, homeless vagabonds, alerted by the internet café face book boasting, the diners had finished their starter of beluga caviar accompanied by a 1953 Petrus. Their host rose to briefly address them.
Out of the side of his glottal stop cheeks, his bulging Grommet eyes glancing round the table, he said, “ I’m sorry our table looks more empty than Conference did, Hitandrun is helping the police, Scotland is swatting up on employment and tax evasion laws and James wasn’t invited. Even had he been, I understand he is spending a couple of nights at The Priory.
Still, Peter, you grace us dressed in your full ermine, Big Bro., you took the bowl of bananas at your place setting so well and Jack you kindly have taken time to join us despite having to hide your BAE donations in such a hurry.”
He paused briefly, the glum faces looked on with puzzlement that this wee lad might soon be their boss.
“So”, he continued, “Our feast has begun and that hint of unimaginable luxury is of nought to when we visit Tone in the new Presidential Palace, only so few of us know about. So thank you all again for coming back to resume our meal.” He sat down and rang a small bell.
The waiters overwhelmed the eight diners as they produced tureen after tureen of exotic fish, lobster and oyster. Seven Montrachet 1978 bottles from Domaine de la Romanée-Conti (that went in a bidding war for an average of $23,929 for each bottle in 2001) were produced as though just purchased in Tesco’s, such is the blasé lifestyle of these Socialists of today.
Conversation was as rare as recent conference smiles but my goodness the food and wine were good.
From the feeding melee a loud hiss erupted, “A toasssssst“, it gurned, “To my great speech and comic act of lassssst week”. They all clinked their glasses and the sound of fine crystal, blown by the peasants from China, invaded the room.
As this splendid course was efficiently swept away, a tall but still unimposing figure stood. “I never realised what Del Simpson meant when he spoke of what it meant to be in the new Labour fold but by God that was one hell of a meal. As for the pop, bloody fantastic”. As he sat down Horse Chops whispered in his ear, “There are four more lots to come, we’re not in my caravan now”, she said.
As they waited for the venison course, conversation began to be quietly engaged around the table. Androgyny leant her newly cropped head towards the banana bowl that now sat between her place setting and her school boyish fellow guest. “Are you a bit miffed at being usurped by Grommet?” she enquired. The peculiar grimace that accompanied a round eyed manic stare unnerved her. “Nah,” burped the twisted mouth of her kids’ testicle product. “They both know oim the next Public School chap to take over”.
The red, bloated face of Blinky grinned with self importance. “What are you plotters whispering about?” enquired Grommet. “SSSSSS nothing,” the ermine cloak swished “They are just chatting which of them will best serve me in my Deputy European President’s Office”. A gasp rose from the table. “Yesssss” he hissed, “Phony phoned me thissss very morning, I wassss not meant to say anything!”.
“B-b-b-b- but what about The Party,” stammered Grommet. “Oh, that,” said Ermine, “Served it’s purpose, dear boy”.
The venison arrived and as the serving dish was exposed the huge slab of meat was uncovered, peppered with small blue, gold and red flags. The guests stared mournfully at the next course.