Is This A Catastrophe?

Gordon Brown, addressing the Major Economies Forum in London this morning, has urged world leaders to come together to prevent a climate change “catastrophe”.

Snowfall Records Fall With First Snow Of The Season. A new snowfall record was set for the month of October, when 13.8 inches was observed at the National Weather Service Office at North Platte Regional Airport. The old record occurred way back on October 29th and 30th 1896, when 13.0 inches was observed. Snow depths of over a foot and a half were reported in and around the North Platte area. Snow fell continuously from 8 pm CDT Friday evening until 10 am CDT Saturday morning. An unusually strong Arctic cold front ushered in temperatures from the upper teens to middle 20s by mid evening Friday. As a strong Polar jet stream acted to bring persistent lift to the area Friday night, moderate snow fell continuously across the Nebraska Panhandle into west central and central Nebraska. Because the airmass was unusually cold, this caused the snow to be rather light and fluffy, thus the high snowfall totals. See this report to the southest out of Hastings, NE. Here is a photo from that site." 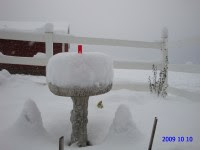