Jimmy has just left the building

What's this! Lord Mandy Fondlepaddles has released a thinly veiled suggestion that he would be prepared to defect to the Conservative Party in return for a cabinet job in Cameron's forthcoming administration. Alastair Darling has said that Labour have 'lost the will to live'. Broon tells us that he is keen to win back Middle England, a proposterous suggestion, can you restore the pensions of a few million men and women? No, they have been spent on enlarging the state to nanny us all to a numb and brain dead spludge on the floor.

When the leadership of a government are denouncing their own party, all is truly lost. How can it ever get to a situation like this? If they are so disenamoured with their own party, they are surely leaving the country to rot and fend for itself like never before. Jim's own party are abandoning the cause like holding scalding hot coals. Longlimbs Marr interrogates Brown on the use of prescription drugs this morning, are the injections becoming more frequent Herr Doktor? Is the right hand shaking? What colourful visions and patterns do you see before your eyes? You only have to look at the video on here the other day to realise that the shakes are there!

We're beyond meltdown, the core has vapourised into the ether, all shreds of control and wisdom have been carried away by the wind. Cameron continues to call for a TV debate with Jimbo and what a test of nerves this would be. Extra sedation Herr Doktor! 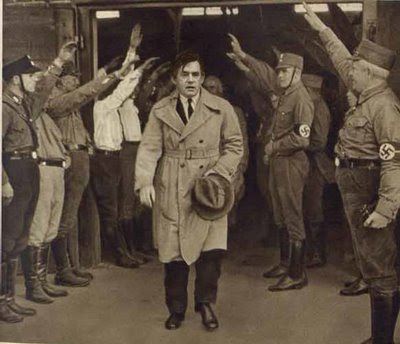