Ireland Sold To The Only Bidder?

As The Enforced "YES" Vote Draws Near, An Auction Was Held. Of Ireland. 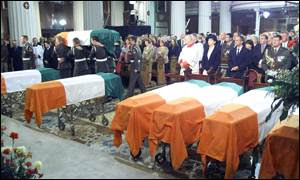 So, with some justification, Ireland fought for centuries against British rule and subjugation. Now they have meekly been sold off to The Rothschilds and The EUSSR project they head, to become a privately owned fiefdom. You could argue they held out longer than we Brits. However the Dynasty marches on with such arrogant certainty they are no longer bothering to hide their grip on money and power. I do wonder what Gadaffi's son walked away with, from Corfu . I thought it was our roads but perhaps it was The UK and Ireland, to use at their whim?
So when Ireland roll over in a few weeks time, remember how this has been manipulated and mourn with me the death of another nation and it's people.