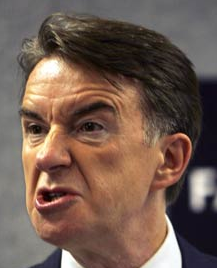 As the bejeweled and immaculately dressed lackey opened the door to the first guest, Grommet could hardly contain himself. Then a wash of disappointment hit him. It was only his brother, Secretary of State for The Foreign and Commonwealth Office. What a joke. Since every citizen was now here what need of that expensive façade.

Ed smiled and gulped. Davy rushed for the canapés and booze. The parent of his stolen kids was not even acknowledged.
Grommet Two hopped from one leg to the other as yet again the bell rang. This time he wet himself. There, in his ermine, a great flood of sycophantic light behind him, was the god of new and old Labour. “My Lord” gushed Grommet. “Take my robe” swirled the imperious figure, as Grommet sank to the floor his hired Polish help efficiently and calmly disrobed the coiled, lithe, smirking figure.
“David’s just arrived”, mumbled Ed, from his supine position. “Who”, hissed the Lord, “Cameron?”.

“No”, replied Grommet getting to his feet. “Oh” replied the serpent, “How disappointing, I was hoping for a new sinecure”.
As the guest of honour slithered in the direction of the coke counter, the bell chimed once more. There will be a Donne moment but it will take time. This is not it.
Grommet was torn. Go and smooch “the man”, leave Davy to gain advantage or greet the next guest. He made, what momentarily, he thought was a great move, he waited for the door to open………………….