One Of The More Obvious Villains, So Far. 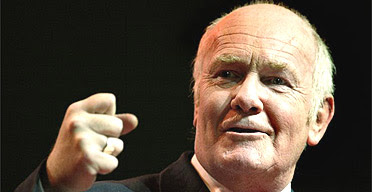 I appreciate that this Guy's standing down to pursue more lucrative pastures. It is also not news that the ex-Defense Minister received an appointment on £50K a year from G4S. We all realise that the movers and shakers work this global back scratching, at our expense, since time immemorial. However, the context of this blogging campaign is to root out such people behind helping The Taleban to kill British soldiers.
G4S is Group 4/Securicor. Remember, the useless "let prisoners escape, it's cheaper" brigade. Well this company is so immersed in Government contracts as to be virtually more powerful than The MoD and Civil Service combined. Their operations in Iraq and Afghanistan rival Blackwaters/Xe. I kid you not, our troops and indeed all of us are fodder to these people. It is global, it is greedy and it is immoral. Time for change. Any MP with paid links of any kind with these organisations, need shaming and sacking. Forget the expenses row, potentially they are complicit in the protection rackets and private (security) armies that are urging on conflict and war to further their own pockets. Wonder where Deripaska is in all this? Who is the highest profile mate of many of these people? I wonder if we can winkle out those traitors? It would be quite a service to those dead soldiers and their families.
Posted by Oldrightie at 10:33