Not Exactly Thrilled To See The Queynte, Are They? 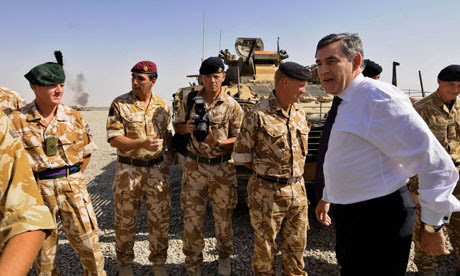 How awkward he looks in the company of real blokes!

My Bete Noir wants to chat, so here goes. Perhaps my loathing for this Government's ineptitude in all it attempts, disastrously, to accomplish, has been most concentrated on their pathetic lack of support and funding for the armed services. Not my words but those of Aintworthalot. "
---------------------------------
“We(?) have tended in politics in this country to concentrate on the domestic, on the here and now – the ‘what’s in it for me’.”
Mr Ainsworth conceded that decisions taken to cut some defence programmes in earlier years could now be seen as mistakes.
In 2004, Gordon Brown’s Treasury imposed a significant cut in the Ministry of Defence’s budget for helicopters, which has contributed to a shortage of aircraft for British Forces in Afghanistan today. "

--------------------------------
Now these words hide much more than their admission of failure. This neglect has led and will continue to lead to further deaths and dreadful injuries. Since we have been placed in these war zones for the benefit of The USA and global self-interest, we ought to have not committed, unless we had the equipment and resources to do it. Not only IEA proof vehicles, helicopters and much more necessary kit was in short supply, even more damning was the lack of medical support. A senior Surgeon General said just today;

"We have been watching the whole campaign – not just Panther's Claw – over the past two to three years, reacting to the number of patients in the hospital. In fact, we identified that there was a stage at which we needed more surgeons and surgical teams to react to the ongoing flow of casualties."

To highlight these words, The Telegraph, today;

"Soaring casualty list forces Army to call on US medics
Scale of injuries caused by roadside bombs and mines in Afghanistan putting unbearable pressure on British surgeons.
By Kim Sengupta, Defence Correspondent
Friday, 31 July 2009
According to the British Limbless Ex-Servicemen Association, 73 members of the armed forces had lost limbs and the number is expected to rise to 80 when recent injuries are counted
The rising toll of British casualties in Afghanistan has left Army surgeons so exhausted that they have had to ask for urgent help from an American medical team. The number of British troops injured in Afghanistan has soared – 57 were wounded in action in the first two weeks of July, the highest figure in such a period for both the Afghan and Iraq conflicts."

I feel strongly that the lack of interest by Labour, in our military needs, since they came to power in 1997 is a disgrace. Regardless of any considerations prior to 97, it is Labour who have sent us into wars knowing we were not sufficiently well FUNDED to do it properly. The helicopter saga, poor terrain troop vehicles and many other aspects of the requirements for the Iraq and Afghanistan fighting are well documented. Now the horrific consequences are being felt down the line via the medical care facilities and personnel, shortcomings.
I really do not know how much more I can do or say to stress my feelings and beliefs. That I and all my supporters on this blog are passionate about the armed services, care deeply for their losses, injuries and families is not in any doubt.
What is very much in doubt is the ability of any Labour Government to get anything right. In this matter their inability is killing people and orphaning a lot of kids. We are broke, bankrupt, skint, ruined. We cannot afford this war or any other. That is my argument and it will take guts to accept it and bring us out of Afghanistan. Labour and Brown, whilst enjoying lavish holidays and exotic company, might care to "get on a war footing". For these champagne socialists, such as Mandleson, Kinnock, Blair, Brown et al, their only preoccupation, admitted by Bob The Knob, pretty well, is their passion to cling to power and a European gravy job.

Time well past when this shower should have been gone.

Now we have a further dash of fuel to the fire of this argument;

So like the 1980s Russian experience. Is this yet another Vietnam?