A Morning's And An Evening's Inklings. 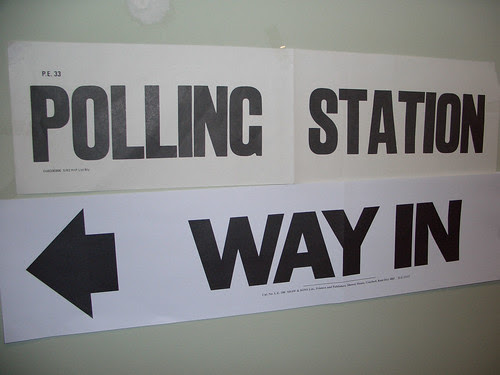 I voted first thing then went off round several polling stations, spoke to a handful of people and returning officers for turnout figures, I feel that;

Turnout may well be high and not good news for Labour.

The expenses row is very much on peoples' minds and they are voting against MPs in the news.

A real possibility exists of a UKIP second place and closer behind The Conservatives than expected.

Labour may well do as Prescott wanted. "Go4th"!

Not scientific but it might be interesting to a few of my loyal readers!

I've just returned from an evening tour similar to this morning. My feelings remain the same as above and a goodish turnout is possible. Maybe in the high 30%. That ought to translate into good numbers for Conservatives and UKIP figures. Labour may do even worse than predicted on a high turnout. The police were called to one station that had been plastered with Libertas posters. Well intentioned newbees! If my predictions are wrong it was not for want of a hard day's night!