Will Anyone Take Any Notice?

"Me And My Shadow, Walking Down The Avenue" 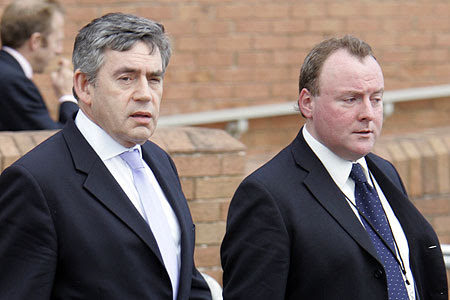 "Parliamentary authorities, overseen by Michael Martin, the Speaker, gave secret permission for some MPs to over-claim for thousands of pounds in home loan interest in deals that led to the systematic abuse of the taxpayer-funded expenses system."

Let's examine some of the situation. Michael Martin, The Unspeakable Speaker is as nasty as Damien and Jimmy Snotty. Their secrets must be all most unbearable without each other to support. Now did they get scared that a mole was leaking some of the really deep shit to The Tories? If so to whom. Was it perhaps Damien Green?

Now the leaked stuff is relatively harmless to individuals. Dynamite for The UK but the citizens were drowsy, numb and apathetic twonkers. After 12 successful years of illegal wars, ten years of weak and fatuous opposition, this all powerful Labour Party could do anything. Boy did they! One guy paid off almost £300,000 of his mortgage. With what? Many others, mostly Labour, fiddled, speculated and got very rich. The least intelligent spent and claimed as they went along.

Who oversees all this? Who joins in, big time. Who turns a literal blind eye?

However the plan begins to go awry. The polls become too painful, wipe out in The EU and local elections beckon, time is running out. So a big but very secret plan is drawn up. Victims are nominated and the fallout assessed. The answer, "nothing to lose". Hazel first and foremost then a select band of others. Frank Field was already sorted but more people needed to be blackmailed. Look, these expenses are to be published anyway, do it now and pull strings from behind the curtain.

What if it goes wrong? Gorbals Mick as fall guy? Why not. He's ready to quit, just make sure he gets a very good pay off.

If I were McBride and Jimmy, I would be feeling pretty good at the moment. Next month? Well let's wait and see, lads.

My mole says all this was planned and is, in the main, working well. Only Mick is a little pissed off but resigned. Pun intended.