After a Failed Coup, Wannabee Head of State Under House Arrest! 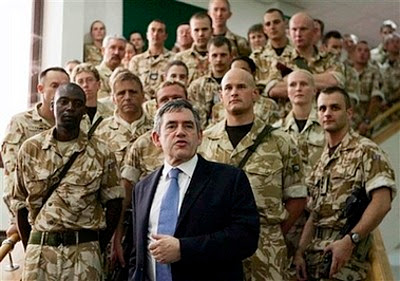 James Gordon Brown remains defiant after a D Day anniversary attempted coup failed. Despite a plot, masterminded by Napoleon Sarkozy, The Socialist axis failed to topple Her Majesty The Queen. Prince Philip has issued a statement to the effect that this ugly and mendacious cyclops never had a chance against crack troops loyal to The Queen. This press release was tempered. He actually said "That fucking fat, pig ugly, shirt lifting nonce never stood a chance when faced with cold steel wielded by soldiers whose arses he could never kiss for want of trying to bloody hard".
A General Election is to be called in which The Labour party will still be permitted to stand, for the sheer joy of watching the meltdown. Postman Pat is understood to be the traitor's temporary replacement until The Party is disbanded. Millions of cheering people invaded London in true "D" day party mood, thronging Buckingham palace and The Mall. Banners, Union Jacks and pictures of The Queen and David Cameron were everywhere. A cancellation of all Labour peerages is expected to be announced by The Daily Telegraph with one token peer to be allowed to remain, as a warning for future generations. It is understood that Lords Mandlefondlebum and Kinnockio have come to blows over which should retain the lifestyle so beloved of champagne guzzling socialists. An ermine auction was held for now useless robes. There were no bidders.
A further development is expected with The Palace writing for real, The Queen's speech. It is anticipated that she will announce stronger ties with The Commonwealth and a complete withdrawal form The EU in protest at their ingratitude for the lives sacrificed to liberate the now tainted French State.

The Downing Street petition for his resignation, is to be left available until after Jim Snot's trial for treason.