Bill Wiggin is my North Herefordshire (Leominster MP) and I offered him space today for anything he might wish to put out with regard to todays Telegraph item, regarding his expense claims. I therefore post his statement below and request any reasonable input on this and any other MPs publicity. 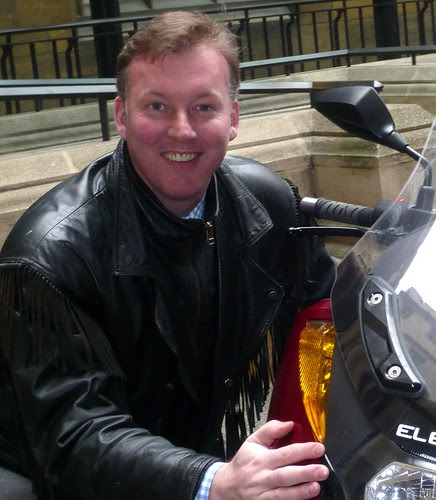 Mp Bill Wiggin is a keen motorcyclist aficiendo.
Bill's statement:
"I have not claimed a phantom mortgage. I have a real mortgage on my London second home. I have always claimed the mortgage interest on this house and have submitted my mortgage statement with my claim. The Mortgage statement makes it clear that I have a London mortgage and how much it is and how much interest I pay. I also submitted an internal form. My mistake was to put the wrong address on the internal form.
I have claimed the interest that I paid exactly and the statements and the forms all match. Yes I made a mistake by putting the wrong address on my internal forms and that is my fault. But it is not true that I have claimed public money on a mortgage that does not exist. It exists and I still pay it.
I do not wish to be grouped with MPs who have claimed for mortgages which do not exist. As soon as I was told that I had been filling the forms out wrong I stopped and did them correctly. It would have been helpful if the mistake I made on my internal forms had been pointed out to me earlier but because a mortgage statement was also submitted it is possible that nobody noticed.
I am committed to openness and support David Cameron's lead on sorting this out. I have not claimed any money that I should not have but regret that I wrote down the wrong details on the internal form. I shall still be holding my public meeting in Leominster at 4pm next Wednesday so that people can talk about this and I can answer their questions."