A Death In The Bunker? 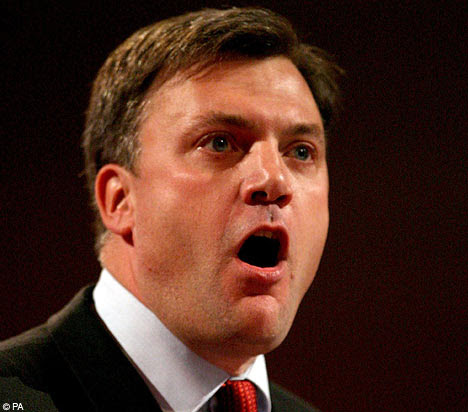 They telephoned “snake shoes” first. He said he was tied up in a meeting with the "Young of Brazil" and couldn't make it for at least five hours. They then called Blinky. His androgynous slave answered. “Your £500, 000 grand a year is at stake” they said. Blinky didn’t stop to dress.
As he fled down the cellar steps and rushed into the gas chamber protected steel door bunker , the sight he was presented with filled him with dread and foreboding.
A dishevelled, barely breathing harridan lay to one side. It’s hatred of men innards disembowelled. Alongside lay a strange, dwarf, chipmunk like creature. It’s mouth displayed a Labour manifesto, stuffed cheek to cheek creating a grotesque, cheerful but blood soaked grimace.
His heart sank. “How could this be spun?”, he mused. Assuming that such a horror might reach the public, or, God forbid, Guido. Then a strange joy entered his heart. Two potential opponents done for. A careful masturbation of his dear Leader’s ego and he could take over the reins of the apocalypse steeds. Yes, the world would be doomed, bar the chariot controllers, who, as the vehicle flew into oblivion, could leap into even greater wealth and riches, as the new bosses of globalisation.
Then another dread hit him. There was still snakeskin shoes. Lord Valdemort and his creator, J K Raw-as-shit. Furthermore what of “Jimmy” of nasal picking fame? He paused. Though the bunker was brightly lit ready for the daily deep clean hospitals never got, there were still deep recesses.
Wait, some of you know what’s coming. The murmur, the adult baby whine. Yes, it was there. Yet from whence it was emanating was not clear. The centre of the bloodstained room had no more than the routine wreckage of the rocking horse stallion, the dirty nappies and the broken YouTube cameras and Nokia mobiles. Something was different. Blinky blinked, dimmed the lights and peered intermittently into the darkest corner. The creature was there. Totally naked, only the stains of the last discarded nappy of bullshit, spin and diarrhoea lying subterfuge could be discerned.
Now he was petrified but curious. Only two days ago this colossus of bullying had sent several delicate news reporters to a psychiatric unit and though a loyal disciple of nepotism, to which his own useless and pathetic nature owed millions, he now harboured hopes of power and grandeur . Feelings this gibbering, snot covered imbecile had instilled in his pathetic chest from the days they cooked the Nations’ books night after night.
So what to do? He knew this baby being was to champion the uselessness of SATS, the billions wasted on overseas contractors, the stupidity of keeping gangs of 18 year old, misogynistic and violent psychopaths in schools already incapable of housing them. What to do. He shivered and fought off panic. Then a gentle and seemingly reasonable, quiet, boyish voice spoke. “Here , let me”. This slight but so determined, cruel and self righteous figure went into the corner where the gibbering, slathering mess cowered. A single shot rang out. “There” said this person, it’s over”. “Oh no it’s not”, said Blinky, “I’ve not cashed this year's expenses yet”! 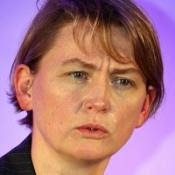 Yvette Cooper, seen here explaining her execution of "Jimmy" Brown. "It was for the protection of my family fortune" she said. "Jame's destruction of that Labour thingy, threatened all my nepotism.".
Posted by Oldrightie at 22:51