Two Faces of The Same Coin? 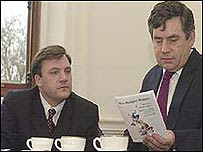 This cosy but very weird trio have held, in some form or other, the financial cradle of our banking and financial system for over 12 years. Now their Fred Goodwin, Victor Blank and many other senior and hugely wealthy banker friends imported from the USA a viral and toxic debt of unbelievable disaster.
This little group lapped up the donations, the parties, the ego massaging and arse licking. Loved it and have become rich beyond their own and our wildest dreams. The expenses scandal raging about us is part of that culture. As they mixed in the circles of great wealth, they coveted it. When the standards demanded of Government Office got in the way they sacked Mrs Filkin, The Standards Commissioner, using Bully Boy Martin to do it. A disgraceful act. Trawl this Governments dirty laundry over the last 12 years and, trust me, this whole mess if of Labours' doing. Yes, other idiots have got greedy and stupid but the environment that was created was done so by these "bankers" . "w" changed for the more sensitive!

Just consider the expenses row and "flipping" of homes.

"The couple released a statement yesterday which said: "The Daily Telegraph is wrong to suggest that London is our main family home.". A London home is part of their job as Ministers. The kids go to a carefully selected school in London and so forth. So he has a "second home" as does she? They also say, despite their £500,000 a year income, "We lost out massively". Try my meagre pension pot destruction comparison, to your "losing out massively". Arrogant and utter Labour deceit and mendaciousness. Give me an old Etonian any day! On top of all this, they are crap at their jobs. Why? Well, look at the economy, consider our education mess. Need I SAY MORE?