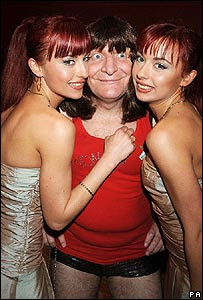 When Gordo is running out of nose sustenance the ever loyal wetnose nurses offer their own material for him to get a fix. Drum roll, BBC midnight oil burning, Rawnsley to Chequers NOW. Let rip the puppies of war until the toothless rotweiler gets back in through the back door disguised as a "bride". Out of the closet comes Stephen Pound, MP and Hazel Blears.

Which face would you tire of slapping first? My choice would be Pound. Hazel has a modicum of intelligence, our boy has not a jot. I will relish his expense claim offerings. What a smug lot Labour are. Talk about the foreman's job at last.

Your spiteful attacks on blogging are inspired by the awful nastiness pushed out of Downing Street. An office so corrupted by it's present and recent incumbent as to rely on you pair to whinge about "right wing bloggers". This medium remains, temporarily if you had your way, a bastion of free speech and sometimes decent debate. At all times it allows for human nature to flourish in all it's forms. You and your Party would wish only for the vicious stuff to be under your domain. As witnessed by DOWNING Street's bunker issued emails and utter crassness. You whinge about "right wing blogs". You, Mr Pound mouth off in your ignorant fashion and typically McBride style, (he's still very much around) sling excrement at "Guido". He, for your possible but unlikely understanding is as Tory as you would be if money exchanged hands. Unlike you, however, he is a bright if difficult cookie.

This leads me on to Ms Blears. You banged on in threatening style last year about blogs. You pontificated about their status and despaired of their freedom. Really, you are scared. This is the only place your stazi control freakery and election fiddling is potentially discoverable. Irony of all ironies the very moral high ground you pretend to espouse is trampled more savagely and disgustingly by DOWNING STREET than any other location.

I close with saying that the blogosphere has grown exponentially opposite to the pornography of your 12 years of Labour Government failure.