Today I have been able to gain access to Labour's Spin factory, under cover. 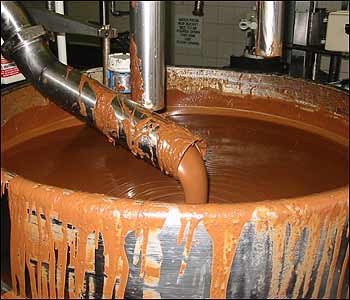 I was able to pass myself off as leader of an exchange "Boys from Brazil" group, invited by a well known, recently ennobled Labour Lord. First impressions as we pulled up in our people carrier were not good. Over the entrance door was a sign, in Latin presumably, "Arbeit Macht Frei". We were led into the main entrance of the Victorian building. A large dilapidated foyer was adorned with spin doctor portraits. Two very prominent ones were of our host for the day. Underneath the one, the title, "Master Snake." The second was entitled, "Iraq Dossier Master". We waited but a short time before our ermine clad, snakeskin shod host appeared silently from an alcove in the corner. He had been watching us secretly.
"Welcome, welcome", he gushed. "So lovely to see you taking a well earned break from your Brazilian night clubs." "Now, some health and safety words," he hissed. "Fire doors are all locked down, in these difficult times", we were told, "getting a bit hot on potential sleaze outbreaks but we are containing them, I think", he continued.
We were now ushered onto a huge factory floor. The noise of spinning wheels, keyboards, telephones, huddled voices shouting from disparate groups. Flickering screens were everywhere. This was the control centre and output machinery floor. This was the giant hub of a propaganda empire costing millions and millions of pounds. Known as the media centre to receive full funding from the taxpayer.
This massive warehouse had large vats and machines everywhere, all labelled. The newest and shiniest was marked G20 recovery goo. It was silent and a large sign said "over spun, awaiting parts".
Just alongside, a smaller machine, chugged labouredly, marked "Get Hannan- chief spin merchant, Prezzapie". We continued down an isle separating vats and machinery. Labels were discerned in the varied lighting. "Stealth tax weaving rig", sat next to a colossal vat, overflowing with a gooey, red mixture. Next a "petrol duty good for you", spinning wheel, "Yvette head spinner".
We continued our tour down a seemingly endless corridor. "Budget con trick" machine came next. "To be operated only with Cyclops express permission" was the label. A very complicated looking, intricate machine followed. "Tory toffee, not to be touched by Labour Toffs or peers" read this label. Small print beneath, "Failed in Crewe but serviced for core purposes come election time." We turned into the next massive isle. This was dark but a large placard was posted at the entrance. "Opinion poll manipulation mechanism under repair". We hurried quickly down this row and turned into a brightly lit avenue of yet more machinery. A massive treadmill was being operated by a dishevelled, unkempt, unshaven figure. It had a stamped title on it's frame. "Blogging wheel anti-macassa. Left turn only, Dolly operated".
We now passed a glass fronted office. Inside could be observed a furious row between an assortment of figures. One dominant, heavy set man was centre of attention. Arms flailing, Nokia phones being hurled wildly, one after the other handed to him, then thrown violently away. Some words could be made out. "G20 and no bounce, what do we employ you for, bloody French and Germans" among them. Others, "My house, porn flics, sodding King" were also audible. During pauses in this rant, quieter voices were murmuring, "Twelve months yet", "We don't have full factory output", were other phrases identifiable, as we continued our tour.
Our host held up his hand for us to halt. "We shall take a break", now he said. "Some of you boys will lunch in my private quarters, some of you may wine and dine at our all expenses paid restaurant." We will continue the tour later. As we climbed a set of stairs and peered down from above, we realised that over all these isles was a massive tentacled contraption, with three huge supports to straddle the machinery. This was also a large tank, like a dead insect's bloated, smelly body. Across the roof of this weird storage vessel were three huge letters. BBC.

The title picture is not chocolate. It was taken of a vat marked "rendered spin".
Posted by Oldrightie at 12:00