Snotty arrives in some style!

Everyone Survived this emergency at Heathrow. 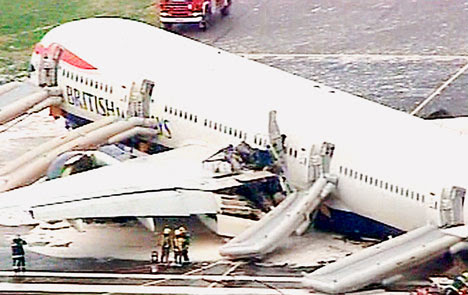 The aircraft cabin was configured for night and the extra long flight from Buenos Aires droned across The Southern Atlantic Ocean, destined for London. On the flight deck the crew re-checked the steel door and bolts, still nervous from the violent incident on the tarmac in Strasbourg.
Back in the ultra-luxurious cabin, only a seven million pound charter could provide, the somewhat deflated media hacks dozed. Their lap tops were closed, the tapping silent. The dim gloom of the cabin security lighting matched exactly the mood of the privileged but chastened passengers. The fevered talk of MSM meltdown and blog ascendancy was stilled. The exhaustion and fear mixed in with the sopophoric drone of 4 Rolls Royce engines. Only Tom Bradby was typing. His honest excoriation of the long, tiring and fruitless journey was the only resonance between the blogosphere and the MSM. Snoring in the reclined, slumber chair just ahead of him, a bald, rarely seen head was just visible mumbling unhappily in it’s sleep.
Further down the cabin were two official types in hushed earnest conversation. One man was whispering in a rapid and fearful monotone to the other. His words just audible. “If you think I’m going to tell him about that shit load of clamour for his head, back home, you can thing again”. The other man whispered back, “You know snake eyes will have killed all the bad news. No way will that Hannan or Farage stuff get out in Blighty.”, he whispered. “As for the Escobar meeting, the fire sale of The Falklands and Michelle Bachelets’ plagiarising of Cameron’s stance, no way will that see the light of day.”
“What about the pale skinned blue eyes stuff from that Brazil Nutter?” said his colleague. “Well that didn’t include Heathcliffe, did it?” was the reply. “Has Snaky spoken with Chewy, yet?” was the next topic raised. “Nah, he’s waiting until we approach Heathrow", his companion replied as they both drifted into sleep.
Some hours now passed. In the isolated, large, first class cubicle ahead of them, in the darkest shadows of the cabin, the now familiar, stock figure sat hunched, one thumb dancing in vain between the pearly, knawing crowns he was so famously born with. A second well known shape slithered down the isle towards the lounging figure. He slid into the huge vacant seat ahead of the crumpled figure. “Briefing time, I’m afraid” he whispered. A few heads stirred and ears pricked. Just the odd word could be heard. YouTube, everywhere, Falklands …too…cheap…riots…Merkel… G20 debacle….then the catalyst everyone on the aeroplane had dreaded for almost 12 hours, “Me..r..v..y..n K..i..n….g”.
The figure screamed violently, lurched from the seat and a mobile phone smashed into the emergency door handle mechanism………….
On the flight deck the bells went off immediately, depressurisation warning klaxons sounded and the crew hurriedly but professionally donned their masks and the radio transmit switch fired into life

“Mayday, mayday, mayday, London Control, Snotty One, emergency descent, cabin depressurisation failure, 120 puerile soles on board……..”
The media hacks’ panic was something to be seen.
To be continued………