The First of a Series of Posts if People Decide to Join In. 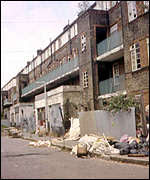 This Government should be in the dock of "The Court of Public Opinion". The charge, "Gross immorality in the execution of their duty of care to The British people". Of the many cases of this charge that are relevant, my first is "Mass Immigration."
There are people living in shanty towns featured over a year ago in a C4 documentary. Our Public Services are at breaking point. Schools, hospitals, benefit costs and administration, housing and transport are some of the issues swept under the carpet, shrugged off by the "so what" attitude of Ministers.
Why is this immoral? The lives of hundreds of thousands of immigrants are blighted by a culture, social environment and squalor they expected not to experience. Many are at the mercy of gangsters who exploit their labour and even their bodies in trafficking and violence. The strain on the indigenous citizens grows ever more unpleasant. Jobs are now scarce, services and benefits hard to get under this appalling weight of numbers. In addition to all this, a recession that is likely to become a depression, will exacerbate the tide of misery and deprivation throughout the Country with only the ruling classes immune from the real horrors. That is immoral and in the same vein as African and other despotic nations.
It seems impossible that in 12 years this depth of decline, caused by an immoral and corrupt Socialist and Labour movement's desperation to hold power at all costs, can be so deep and horrendous.
We have yet to experience the worst of this immorality's consequences. My final point is this. The massive numbers of economic migrants leaves precious little room for genuine victims of political aggression and war. For me immigration should always have been economically unnecessary but humanely a priority.

My verdict is GUILTY!