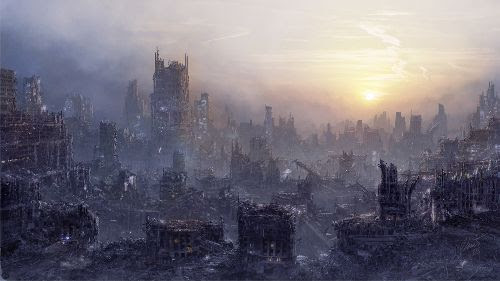 Like many ordinary people I have been very pissed off since 1997 when Brown came into power. His pension raid/destruction, gold sell off and changed banking regulation all scared me. The PR might, nobbling of The BBC and Murdoch filled me with dread. I banged on that all I could say was that it would become a disastrous regime. I was unable to forecast when. Oliver Letwin was asked if the 2005 election was a good one to lose. He replied, no because of the continued destruction Labour and Brown would wrought upon us all. When I fired up this blog my theme was the future nightmare awaiting us. This is now filtering through. I will not bore you with detail. It is apparent around us, more and more. Two million, three hundred thousand jobless and close on or soon to be ten million people on benefit is worth a mention.
Most commentators tell us this will all come good eventually without ever considering "What if it does not?"
So here is a doomsday vision of The UK's future. Less painful if we were to lose The Labour Party but still the legacy will be grim.
Presently comfortably off people will begin to slide down the socio-economic table, low cost housing will become even more scarce. Large, expensive properties will follow shops and business premises into boarded up ghettos and empty streets.
As this happens, already low level socio-economic groups will be pushed deeper into abject poverty and hunger. Crime, violence and sickness will outpace a dwindling police force and NHS. Even the protected public sector will be damaged as Government has to service debt at a rate too close to any remaining GDP. It will be a vicious circle that only mass migration on a par with the potato famine will have any effect.
Only a very privileged few will be untouched. Many will be politicians with inside knowledge of how bad this is to be. Tony Blair is one such individual. Sir Fred Goodwin and Paul Myners two others. Brown will be in a very dark place. Most of his ministers long forgotten.
Is there any hope?
Not if the people who have got us here remain unpunished. Not if we cling to the immigration levels, the failed socialist dogma and the misery it has brought us. Will it take my scenario before it is too late? I fear it is too late.