Another Tragic Loss of Our Soldiers.


Two soldiers have been shot dead during a gun attack at an army base in County Antrim, the Ministry of Defence says.

Security forces defused a 300lb (136kg) bomb in Castlewellan, Co Down, close to a barracks in February 2009.

The important thing is that we must not see politics and the peace settlement that we have, fragile though it is, destabilised by this kind of action," he added. 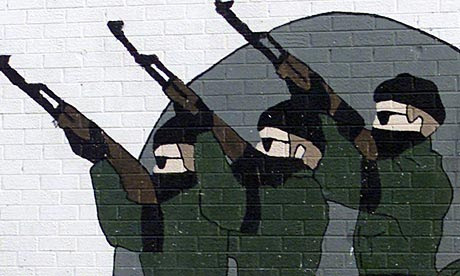 This is referred to as a fragile peace. Since when? Our Government has yet again kept quiet a situation that they wished to share behind closed doors. With our soldiers dying in far away places shades of The Balkans fall on our own Islands. Will they do a "Kosovo"? Who knows but I see this awful lack of resolution a continued stain on our ruling elite. Never mind "Globalisation", knighthoods for American careless drivers and supporters of The IRA, or Palestinian Peace Envoys.

How about minding the "shop" at home?