The revised open letter to The Prime Numptie. 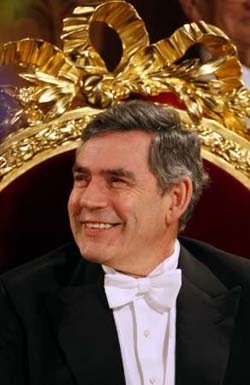 Above before stealing, unelected and unopposed, the foreman's job, at last! To the right, all together now, "The working class (and all my mates) can kiss my ar*e, ....."

Dear Prime Minister,
I have been asked to write to you in a more direct and aggressive manner to more genuinely reflect the feeling within the Country you have so dreadfully brought to its knees. Let me begin with these weasel words of yours from 2006.

“And I am ready, I think, to help this country move into its new generation where I think the challenges we face are ones that, because of the values that bind us as a country together, we are uniquely able to say that we are going to be one of the great global success stories of the future."”
“Its new generation” Is this the one you’ve royally buggered? Or is that one of many future generations that have to pay for your utter fuckwit incompetence?
May we consider further twattish achievements of your utter hoon like character? So called Labour Champagne Socialist.
You turned up year after year in your scruffy, smelly day clothes, to the Lord Mayor’s banquet where you preached that now discredited piffle and crap about how wonderful debt was for the Country.
Well, you’ve got the bloody top job now so it’s the full Monty bib and tucker. What do you look like? Cat that got the sour fuc***g cream.
Guess who’s paying for that lot of trough monkeys. Then there’s Lord Mandy sodding Pandy. What’s that all about? Feeling lonely with no one to change the nappy.
What about the EU that yanks your strings?
Privatise the Royal Mail? Hand it over like everything else to your masters across The Channel. Guess that will be renamed the EU Channel next.
As for the sleaze. Just do not know where to begin. I refer you to my “must read” column.
Prime Minister of prime excrement. Will you have the balls to preach to the Yanks, as you have to us, it all began in America? I doubt it.
Well, Mr Brown, I have to dash for now but to summarise my blog’s comments with regard to my earlier missive.
You are hated just a smidgeon more than your hateful, Orwellian Party of numpties, misfits and cretinous deviants, especially your namesake Nick(ed on Clapham) Brown.
The overwhelming desire is for you to FU*K off and call an election. Time for change not debt.
Yours more sincerely than you could ever know,
An impoverished by your useless Government of zero talents,
Oldrightie.