More of our silver sold?

Is this a rope around his neck or ours? What did he promise them? 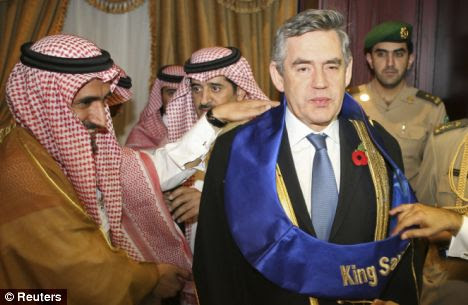 Gordon Brown in UAE to talk money
November 03, 2008
British Prime Minister Gordon Brown will arrive in Abu Dhabi today on a two-day visit in the final leg of his four-day Gulf tour.He’s asking for assistance from oil-rich countries to bail out western economies from the current crisis.

Oldrightie was convinced that Snotty toured the world begging for money. Now it appears that the Japanese sent him off to United Arab Emirates to chat about "things". What is the tie up with
Barclays? £7.3 Billion was the stake UAE took in Barclays. The value of the train deal is? £7.5 Billion. So Hitachi, Barclays and John Laing are all heavily into UAE funding. Hard for a humble newbee blogger to get much deeper but it has a ring of a desperate sell out of UK Plc to me? Any comments out there? What and to whom else has he sold out "British Jobs for British Workers"? Where will the profits end up?