Warning, not for the faint at heart! 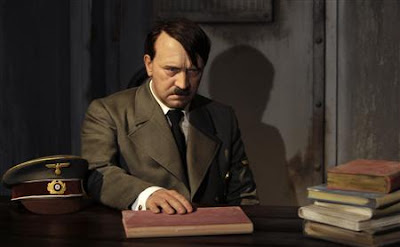 Thursday afternoon, the 17th of February, 2009, in the bunker. An exhausted, rather dishevelled figure lies in a bay window, stretched on a chaise lounge. Gently rocking in the corner, a tired and paint worn rocking horse, eeks out the last dying movement of it's recent hard and fiendish pounding. It is drenched in the residue from a large nappy discarded by it's side.
Attending the supine figure that is gently moaning a deep guttural sound, is an equally scruffy and untidy, unshaven male. The latter whispers quietly, "I can cure you. I am from Berkley and I am the most accomplished shrink you could ever know." Still the moaning continues. There is a firm but quiet knock on the door. The "shrink" tip toes across the room to open it. There stands a tall, snake like, shadowy figure. This man bows to whisper in the shrink's ear. "Did you tell him yet?", he asked of the shrink. "Yes, Cameron's lot up 4%, we're down at 28%."
Suddenly the figure on the couch let's out a scream of rage and leaps to his feet. In the dimly lit room a single eye blazes with incandescent rage and fire. A large phone like object hurls toward the two men at the door, shattering against the frame.
On and on roars the voice in the room.
"I'll give you fu**ing 28%, I'll give you 10% before I'm sodding finished. Scorched earth my ar*e, I'll piss off abroad and leave this ungrateful Peasant Nation in more shit than Hannibal's elephants ever discharged. Just you see. Balls leader? He'd be no f***ing where if I hadn't shown him what real men do, the ungrateful bastard. As for you", he points at the men once more, a fresh mobile clutched in his shaking fist, "You pair of bloody forget- me nots, what have you been doing. One of you makes a bog of a simple blog and the other pi**ses around dancing with some aged TV dame, pretending to be f***ing straight for f**k's sake. Well I'm not done yet."
He slumps to his knees, dribble pouring from the corners of his mouth. The two men quietly close the door behind them as they leave.
"H'm", says the scruffy one, "I think that went quite well". The Snake hissed.
Posted by Oldrightie at 20:13